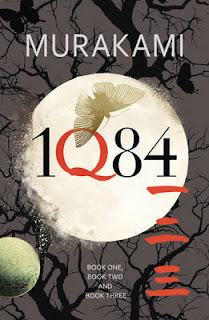 
Goodreads Summary: A young woman named Aomame follows a taxi driver’s enigmatic suggestion and begins to notice puzzling discrepancies in the world around her. She has entered, she realizes, a parallel existence, which she calls 1Q84 —“Q is for ‘question mark.’ A world that bears a question.” Meanwhile, an aspiring writer named Tengo takes on a suspect ghostwriting project. He becomes so wrapped up with the work and its unusual author that, soon, his previously placid life begins to come unraveled.

What did I think? This is one of the 1001 books a bunch of people think I (and others) should read before the inevitable dying part of life. And it's one I've been meaning to read for quite a while.

Before 1Q84 I've only ever read one other Murakami novel and I clearly remember falling in love with the way he writes. It was a revelation. Compared to that experience 1Q84 is a disappointment and I can't quite explain why.

Possibly because I was only 18 years old and back then easily impressed by books? Or maybe because I read it in German and this one in English? Maybe it's the translation.

1Q84 is an intriguing book, but I neither enjoyed the way it all comes together, nor the length of it. In fact I almost gave up on it about halfway through. It's easy to be sucked into the story at first.

Each chapter alternates between the points of view of the two main characters and it takes a long time before the connection becomes clear. Aomame is full of surprises throughout the first half, whilst Tengo doesn't seem to have that many layers.

Murakami paints interesting characters, talks a lot about food and the sex scenes are incredibly awkward (but he sure knows how to describe breasts.) He also doesn't fully explain a lot of magical things that are happening throughout the plot, to the point where 1Q84 left me with too many questions and not enough answers.

Maybe this wasn't the right book to pick up for me at the moment. Maybe I need to go back and read his other works to find that feeling I had, when I read him for the first time.

I definitely wouldn't recommend this to someone who hasn't read Murakami before.
By Olivia at October 04, 2016
Email ThisBlogThis!Share to TwitterShare to FacebookShare to Pinterest
Labels: 1001 books, haruki murakami, literary