Gardens of the Moon by Steven 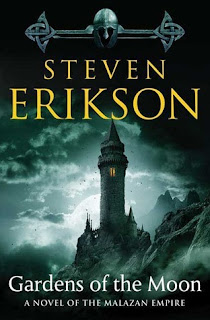 Goodreads Summary: The Malazan Empire simmers with discontent, bled dry by interminable warfare, bitter infighting, and bloody confrontations. Even the imperial legions, long inured to the bloodshed, yearn for some respite. Yet Empress Laseen's rule remains absolute, enforced by her dread Claw assassins. For Sergeant Whiskeyjack and his squad of Bridgeburners, and for Tattersail, surviving cadre mage of the Second Legion, the aftermath of the siege of Pale should have been a time to mourn the many dead. But Darujhistan, last of the Free Cities of Genabackis, yet holds out. It is to this ancient citadel that Laseen turns her predatory gaze. But it would appear that the Empire is not alone in this great game. Sinister, shadowbound forces are gathering as the gods themselves prepare to play their hand...

What did I think? This is a favorite among fantasy readers. Almost worshiped by many. However as a new reader you also get warned: it's complicated. It's dense. You get thrown into the middle of a story without any explanation whatsoever. Be prepared.

I was prepared. But (sadly) it still didn't work for me. This is hard for me to write, because I definitely see the depth of the world building and I can tell there's a lot to discover. It's a detailed world. And it's waiting for me to dive in and have fun.

But instead I felt...lost? I felt lost despite notes, despite chapter summaries, despite character portraits and maps, and towards the end I had the impression the book just turned into a bunch of chaotic events and none of it really mattered...

For me it almost came across as if I was punishing myself with this book. Back to school, and back to homework. I made notes and it felt like a chore. But most of all: Erikson did not manage to make me care. A lot of what happened just happened and I wondered, why? And why does it matter? And why should I care?

Maybe I should give up on the note taking and just read the second installment, see where it takes me and once I'm done (and if I liked it) revisit Gardens of the Moon. Or, maybe I should just give up on Malazan altogether, I haven't made up my mind just yet.

Gardens of the Moon is a complicated story. The writing is solid but not memorable (the first book was written years before the others, and apparently Erikson's writing improves a lot in later books). If you like epic and complicated fantasy, please do give this a try, I can see why so many readers absolutely love this series and if I read it again I'll make sure to review it again. Who knows.

If anyone is interested in some of the helpful websites that exist out there to help a first time reader: