Kafka on the Shore by Haruki Murakami 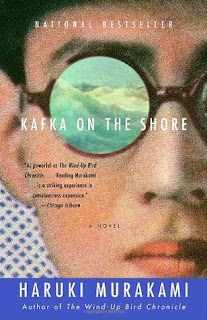 Goodreads Summary: Kafka on the Shore is powered by two remarkable characters: a teenage boy, Kafka Tamura, who runs away from home either to escape a gruesome oedipal prophecy or to search for his long-missing mother and sister; and an aging simpleton called Nakata, who never recovered from a wartime affliction and now is drawn toward Kafka for reasons that, like the most basic activities of daily life, he cannot fathom.

As their paths converge, and the reasons for that convergence become clear, Haruki Murakami enfolds readers in a world where cats talk, fish fall from the sky, and spirits slip out of their bodies to make love or commit murder. Kafka on the Shoredisplays one of the world’s great storytellers at the peak of his powers.

What did I think? Once I'd read the last word in this book, I grabbed my phone and immediately started researching the meaning behind the story, behind the ending and what others made of it all. Partly because I'm not sure I understood everything (if it's even possible to understand everything in a Murakami book) and partly because I'm sure the story can be interpreted in many different ways.

I found a lot of different interpretations and I much enjoyed reading other reader's opinions on the book.

Haruki Murakami definitely isn't for everyone. His work is surreal, filled with magic and 'what exactly am I reading?' moments. Murakami doesn't hold the reader's hand and at the end he doesn't deliver a neat package with an ending that ties together all the loose ends. Quite the opposite in fact, he leaves most of it up to the reader's imagination and interpretation.

His work is magical, his prose wonderful. Murakami's characters are interesting and always searching for something.

Kafka on the Shore is a page-turner, at least it was one for me and I highly recommend it. I couldn't stop reading and worked my way through it more or less in one sitting. It's engaging and filled with mythology and metaphors. Reading it felt like entering a dream.
By Olivia at December 05, 2016
Email ThisBlogThis!Share to TwitterShare to FacebookShare to Pinterest
Labels: haruki murakami, literary