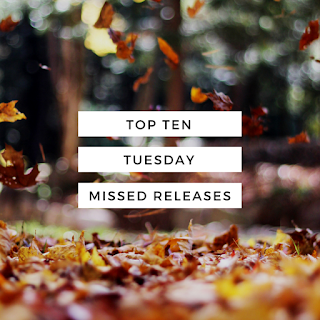 This week the topic is: 2016 Releases I meant to Read but somehow missed and still want to get to, eventually. You can find this week's post by The Broke and the Bookish here.

I never usually read new books. As a child my parents had entire shelves filled with books available for me. Mostly literary and classics. I grew up on German authors like Goethe, Hesse and Schiller, Russian authors like Tolstoy and Dostoyevski etc. You get the drift.

As a teenager I discovered genre literature. I discovered fantasy and I started reading LOTR and other books. But always recommendations from friends. And always books that had come out years ago.

I was some sort of patient reader. It wasn't until I discovered Goodreads that I started picking up newer books simply because so many people were talking about them and I saw the covers and got curious.

Then I discovered the book blogging community and suddenly new releases were on my radar. Too many books to read, not enough time. The eternal problem.

Sarah J. Maas. Well, I'm hopelessly behind. I've only read the first Throne of Glass novel so far. And i have #2 and #3 waiting for me. Hopefully I'll catch up soon.

I read the first one in both series last year. I liked both. So, these will be picked up soon.

I'm not sure what to think of the "Nutshell" premise. Hamlet. Told from the POV of a foetus in the womb. But, I'm curious. The other two covers I've seen on Goodreads quite a bit, am curious but know nothing about them.

I loved her retelling of Cinderella, so I'm curious to see what Marissa Meyer did with Alice. Now, Nevernight, I've only heard of the title and the author but I'm curious because of the cover.

I'm not a fan of graphic novels usually but Saga somehow captured my heart. I'm currently on Volume 3 and trying to catch up.

What releases did you miss in 2016?
By Olivia at January 10, 2017
Email ThisBlogThis!Share to TwitterShare to FacebookShare to Pinterest
Labels: top ten tuesday