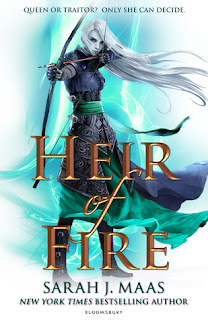 Here's my review for the first book.

Goodreads Summary: In the dark, filthy salt mines of Endovier, an eighteen-year-old girl is serving a life sentence. She is a trained assassin, the best of her kind, but she made a fatal mistake: she got caught.Young Captain Westfall offers her a deal: her freedom in return for one huge sacrifice. Celaena must represent the prince in a to-the-death tournament—fighting the most gifted thieves and assassins in the land. Live or die, Celaena will be free. Win or lose, she is about to discover her true destiny. But will her assassin’s heart be melted?

What did I think? I really liked the first book. It had a simple plot and the characters were lacking real depth, but it was fast paced and entertaining.

The second and third one, however, I didn't dislike, but I was somewhat disappointed. Just like the second one, Heir of Fire takes a long time to really get going. The first half is incredibly slow, almost dull, and I really didn't enjoy the chapters about the witches. I mean, they sort of came out of nowhere? And so far they haven't really added anything to the plot? Then another guy gets added to the love triangle. It's now a quadrangle. Sigh.

Let's talk about the good things: Celaena's character development is phenomenal. She is stronger and more determined but also stubborn and somewhat snarky. Dorian gets some incredible development as well and even an opportunity to stand up to his father. The world becomes more complex and more depth. In fact I think the world building is amazing in this series.

The good things are the reason why I will pick up the fourth book. Especially the world building. However if I still think it's slow, I might just stop there. For now, I'll keep going.
By Olivia at February 18, 2017
Email ThisBlogThis!Share to TwitterShare to FacebookShare to Pinterest
Labels: fantasy, sarah j. maas