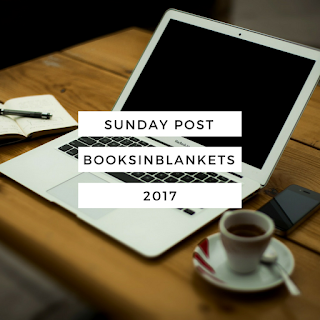 The Sunday Post is a weekly meme hosted by Kimberly @ Caffeinated Book Reviewer.

If you participate, don't forget to link up and if you leave me a comment, I will definitely check out your blog.

I ran a 10K this week! The British Science Association is currently hosting a virtual race called Run the Solar System. Runners anywhere in the world are able to download an app and take part in this race during British Science Week. It was a slow run, lots of walking as well, but we did it. (It's done by the same people who are behind the Zombies, Run app.) We went out yesterday, but you can do your race any time between now and next Sunday.

Otherwise my week has been uneventful. The weather is average, my writing is going well, and the dogs are behaving. It's one of those weeks you can't say much about.

Last week on my blog:

Last week in my kitchen: Pork fillet filled with basil and feta cheese, slow cooked in the oven.  That was the best dish I made this week. Otherwise my kitchen life has been pretty uneventful as well.

Last week at the cinema: Viceroy's House (British drama with Gillian Anderson and the guy from Downton Abbey, Hugh Bonneville, about the British withdrawing from India and in the process carving the country apart) and Logan... a gritty Wolverine film that broke my heart.

Next week a dear friend from Switzerland is visiting and I hope to still get some reading time. I wish everyone a great week!
By Olivia at March 12, 2017
Email ThisBlogThis!Share to TwitterShare to FacebookShare to Pinterest
Labels: sunday post