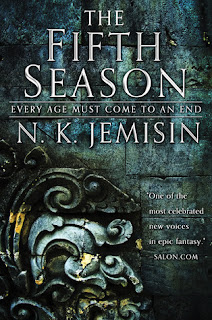 Goodreads Summary: This is the way the world ends... for the last time.
A season of endings has begun. It starts with the great red rift across the heart of the world's sole continent, spewing ash that blots out the sun.
It starts with death, with a murdered son and a missing daughter.
It starts with betrayal, and long dormant wounds rising up to fester.
This is the Stillness, a land long familiar with catastrophe, where the power of the earth is wielded as a weapon. And where there is no mercy.

What did I think? 4.5 Stars, most likely. Though not far from a full 5 Stars. The Fifth Season is unlike anything I've read in a long time. A perfect blend of science fiction and fantasy with a fascinating world.

The prose is very pretty, the world building interesting and the characters enticing. It's been a while since I've read a book where I liked everything. All POV characters (three female protagonists), the setting, the story and the prose.

The world building and magic system are both well developed and interesting. In this world some people are Orogenes and they can control seismic activity and hence move mountains, create earthquakes or even still earthquakes. Because humans fear the unknown the Orogenes are feared and often killed or trained and treated as slaves.

I think The Fifth Season is best enjoyed going in blind. If you're confused at first, don't worry, it'll all come together and if in doubt use the glossary at the end of the book.

I read this as part of the fantastically diverse read-athon that Uma put together over @ Books.Bags.Burgers and I know I'm late by now, but I don't care. I have a few more I want to read even if it takes me all of 2017.
By Olivia at March 08, 2017
Email ThisBlogThis!Share to TwitterShare to FacebookShare to Pinterest
Labels: diversity, fantasy, n. k. jemisin, read-a-thon