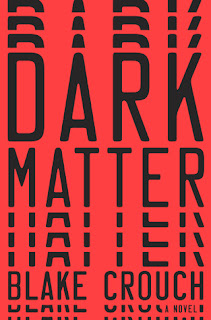 Goodreads Summary: Jason Dessen is walking home through the chilly Chicago streets one night, looking forward to a quiet evening in front of the fireplace with his wife, Daniela, and their son, Charlie—when his reality shatters.
It starts with a man in a mask kidnapping him at gunpoint, for reasons Jason can’t begin to fathom—what would anyone want with an ordinary physics professor?—and grows even more terrifying from there, as Jason’s abductor injects him with some unknown drug and watches while he loses consciousness.
When Jason awakes, he’s in a lab, strapped to a gurney—and a man he’s never seen before is cheerily telling him “welcome back!” Jason soon learns that in this world he’s woken up to, his house is not his house. His wife is not his wife. His son was never born. And someone is hunting him.

What did I think? It's a bit difficult to review Dark Matter, to be honest, because basically anything I can say about the philosophical questions it poses would give part of the plot away. Don't read up on it, just read it with all of its surprises.

The most important thing you need to know is this: I read it in one sitting. Dark Matter is a little over 300 pages and I started reading one afternoon and I refused to make dinner until I was done. I literally could not put it down.

If it weren't for that aspect I'd probably have given it 3 stars. Why, you ask? Because despite it being a thrilling story that asks some deep philosophical questions and offers an original and creative premise, I was somewhat disappointed by the final act.

It starts out great, even the dreaded slow middle is fantastic. The entire book feels more like a movie than a book, that's how fast the plot moves forward. I predicted the twist, but only because I'd read similar books.

While the beginning and middle are surprising and original, sadly, the ending is a bit too neat and played out exactly as I thought it would. I would have appreciated and even expected Blake Crouch to take the story one step further, which he failed to do.

Nonetheless definitely worth a read if only because of its addictive nature.
By Olivia at April 12, 2017
Email ThisBlogThis!Share to TwitterShare to FacebookShare to Pinterest
Labels: blake crouch, sci-fi