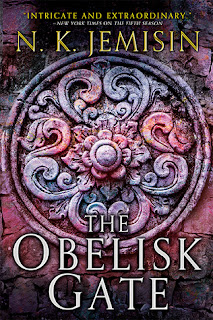 As usual there will be NO spoilers for previous books in the series, so the summary is the one for the first book.

My review of the first book can be found here.


Goodreads Summary: A season of endings has begun. It starts with the great red rift across the heart of the world's sole continent, from which enough ash spews to darken the sky for years. Or centuries. It starts with death, with a murdered son and a missing daughter. It starts with betrayal, and long dormant wounds rising up to fester. And it ends with you. You are the Stillness, a land long familiar with catastrophe, where orogenes wield the power of the earth as a weapon and are feared far more than the long cold night. And you will have no mercy.

What did I think? The Fifth Season was unlike anything  I'd read in a long time. A perfect blend of science fiction and fantasy in a fascinating world. But when I picked up The Obelisk Gate, I had just read something like it, not too long ago: The Fifth Season.

Don't get me wrong, the second book in the trilogy is just as good as the first, but I knew what to expect and was no longer blown away by the novelty of it.

It's very hard to write about this series without giving too much away, because I believe this world should be experienced without any prior knowledge. There are strong female characters, clever world building, an interesting and novel magic system and wonderful prose. Part of it is written in the 2nd POV, bringing you even closer to the main character. It takes a little getting used to at first, but Jemisin knows how to make it work.

A beautiful read that I recommend to every fantasy fan with a bit of patience, because Jemisin does ask for some patience with her slow and subtle reveals.
By Olivia at April 27, 2017
Email ThisBlogThis!Share to TwitterShare to FacebookShare to Pinterest
Labels: diversity, fantasy, n. k. jemisin, read-a-thon