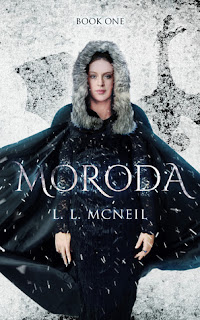 You can order paperbacks from the author's website here.

Goodreads Summary: Moroda’s life is thrown into turmoil after she is publicly arrested—her city is destroyed and she narrowly escapes the chaos on a sky pirate’s airship. But she finds no salvation outside the blackened city walls; a vigilante from an exiled race has left a trail of destruction everywhere his growing army has travelled. With compulsion at his fingertips, he strengthens his hold over Linaria’s people by stealing the power of dragons. It’s only a matter of time before she, too, is forced to submit.
With war nipping at her heels and danger lurking in her companions and adversaries, Moroda must quickly learn about herself, her world, and the dragons so intent on reducing it all to ash.

I received an ARC of the paperback from the author in exchange for an honest review.

Moroda is L.L. McNeil's debut novel and I was excited when I found out that it's an epic fantasy with a female protagonist and dragons. Who doesn't love dragons?

It's an easy read that starts a bit slow but quickly turns into a gripping story about a young woman who sets out to save her world, Linaria, from a war. On her journey she meets a varied bunch of characters. They all feel authentic and have interesting pasts and promising futures.

The world building is creative, yet straightforward making this a good book for someone who does not usually read fantasy and might shy away from the sheer complexitiy of some of the work out there. The different races in Linaria are fresh and well imagined and I especially hope to see more about the Varkain in the sequels.

It took a while to get into the book. The first chapter sets everything up nicely and is certainly intriguing but Moroda is young and reluctant, even a bit shy at first and it takes a few chapters before her character fully blossoms and starts kicking ass.

L.L. McNeil has created several strong female characters, but the one I enjoyed most was Amarah the sky pirate with her airship. The book also has an interesting villain and some compelling morally grey characters I found myself rooting for halfway through.

I would recommend Moroda to anyone who is looking for a new twist in epic fantasy with a character driven plot and dragons.
By Olivia at May 03, 2017
Email ThisBlogThis!Share to TwitterShare to FacebookShare to Pinterest
Labels: fantasy, l. l. mcneil