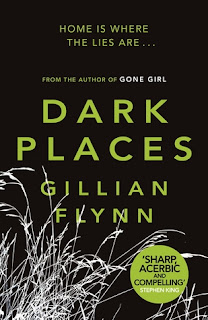 Goodreads Summary: Libby Day was seven when her mother and two sisters were murdered in “The Satan Sacrifice" of Kinnakee, Kansas. She survived—and famously testified that her fifteen-year-old brother, Ben, was the killer. Twenty-five years later, the Kill Club—a secret secret society obsessed with notorious crimes—locates Libby and pumps her for details. They hope to discover proof that may free Ben. Libby hopes to turn a profit off her tragic history: She’ll reconnect with the players from that night and report her findings to the club—for a fee. As Libby’s search takes her from shabby Missouri strip clubs to abandoned Oklahoma tourist towns, the unimaginable truth emerges, and Libby finds herself right back where she started—on the run from a killer.

What did I think? Gillian Flynn must have such a dark and twisted imagination, I wouldn't want to visit her mind. I find her books downright terrifying because she portrays the worst in humans in such a detailed manner.

Dark Places is so much better than her first book (Sharp Objects) and possibly even better than Gone Girl. The novel is told primarily in first person through the eyes of the protagonist but we get to see the day of the massacre from the point of view of Libby's mother and Ben as well.

I wasn't entirely happy with the ending to the mystery because once you find out what actually happened, it feels a bit unrealistic and it left me thinking: really??

But, despite a somewhat unbelievable ending I was in awe throughout this novel because Flynn is such a master at blending the macabre and grotesque with family dysfunction, personality disorders and the typical small town mentality.

The characters are complex and well developed, though I would suggest you read this surrounded by people who make you happy unless you want to lose whatever faith in humanity you have left.

If you love dark and twisted characters, can stomach brutality and murder, definitely pick this one up, yes, even if you didn't enjoy Gone Girl.
By Olivia at June 24, 2017
Email ThisBlogThis!Share to TwitterShare to FacebookShare to Pinterest
Labels: gillian flynn, mystery, thriller