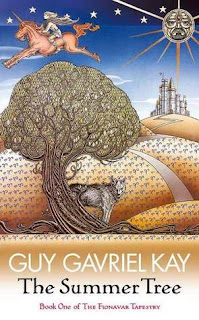 Goodreads Summary: It all began with a lecture that introduced five university students to a man who would change their lives, a wizard who could take them from Earth to the heart of the first of all worlds—Fionavar. And take them Loren Silvercloak did, for his need—the need of Fionavar and all the worlds—was great indeed.
And in a marvelous land of men and dwarves, of wizards and gods—and of the Unraveller and his minions of Darkness—Kimberly, Dave, Jennifer, Kevin, and Paul discovered who they were truly meant to be. For the five were a long-awaited part of the pattern known as the Fionavar Tapestry, and only if they accepted their destiny would the armies of the Light stand any chance of surviving when the Unraveller unleashed his wrath upon the world.

I've read The Lions of Al-Rassan by Guy Gavriel Kay earlier this year as my first GGK read. Here's my review. I really enjoyed it and wanted to read more books written by him. He usually writes light fantasy which I'd describe more as historical fantasy or maybe even alternative history. GGK takes an era and a region and tells his own alternative version of history. The Lions of Al-Rassan is set in medieval Spain and Tigana is set in Renaissance Italy.

Now, The Summer Tree is traditional epic fantasy. The kind where a small group of people get swept away through a portal into a fantasy land and become heroes and have to save the place from evil. I got lost in this book and couldn't stop reading.

The prose is lyrical and it was a pleasure to read every single sentence... I got lost in it. It was almost like sitting around a camp fire and listening to a poet. Marvellous experience.

I recommend this book to anyone who loves Tolkien and traditional epic fantasy. It does show its age (it's as old as me, eek) but I fell in love with all the characters and can't wait to read the rest of the trilogy.
By Olivia at December 05, 2017
Email ThisBlogThis!Share to TwitterShare to FacebookShare to Pinterest
Labels: fantasy, guy gavriel kay, high fantasy