The Shadow of What Was Lost by James Islington 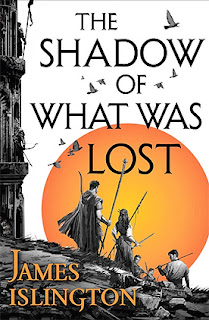 Book Title: The Shadow of What Was Lost
Author: James Islington
Genre: Fantasy, (On the YA side, but not marketed or sold as YA)
My Rating: ♥ ♥ ♥ ♥ ♥
Source: Library

Goodreads Summary: It has been twenty years since the end of the war. The dictatorial Augurs - once thought of almost as gods - were overthrown and wiped out during the conflict, their much-feared powers mysteriously failing them. Those who had ruled under them, men and women with a lesser ability known as the Gift, avoided the Augurs' fate only by submitting themselves to the rebellion's Four Tenets. A representation of these laws is now written into the flesh of any who use the Gift, forcing those so marked into absolute obedience.
As a student of the Gifted, Davian suffers the consequences of a war fought – and lost – before he was born. Despised by most beyond the school walls, he and those around him are all but prisoners as they attempt to learn control of the Gift. Worse, as Davian struggles with his lessons, he knows that there is further to fall if he cannot pass his final tests.
But when Davian discovers he has the ability to wield the forbidden power of the Augurs, he sets into motion a chain of events that will change everything. To the north, an ancient enemy long thought defeated begins to stir. And to the west, a young man whose fate is intertwined with Davian’s wakes up in the forest, covered in blood and with no memory of who he is…

I loved this book. I had a ball reading it. I devoured it in a few days. I did not want to put it down.

It starts out as a straight-forward fantasy adventure. Youth finds out he has the ability to wield a forbidden power and ancient evil stirs at the edge of the map. However, it quickly evolves into a complex tale with countless twists and turns and a bunch of lovable characters.

My main issues with the book were minor ones. You can tell this is James Islington's debut. If you're a seasoned fantasy reader, you will spot repetitions and moments where the pacing is off. Nothing bad, just something that shows, yes this is a debut.

Caeden is my favourite character. They're not all as well developed as they could be, but it's only the first book in a trilogy...there's time.

The world building is intriguing, and I loved the extensive back story Islington built. The magic system is fascinating. I've seen the book compared to Wheel of Time and I can imagine this is how it must have felt to read those first few books back in the early 90s.

It's not a difficult plot to follow for fantasy fans, but it does require some attention. I do think it's a great introduction to the genre for non-fantasy fans and would (obviously) recommend it to all fantasy fans. I've also read the second book in the series (the third is not yet out, as of spring 2018) and it gets even better. Definitely one to pick up!
By Olivia at March 16, 2018
Email ThisBlogThis!Share to TwitterShare to FacebookShare to Pinterest
Labels: fantasy, james islington