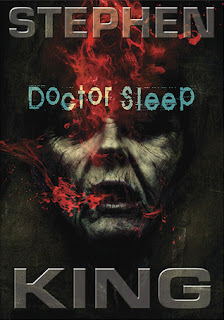 Plot Summary: Stephen King returns to the characters and territory of one of his most popular novels ever, The Shining, in this novel about the now middle-aged Dan Torrance (the boy protagonist of The Shining) and the very special 12-year-old girl he must save from a tribe of murderous paranormals.
On highways across America, a tribe of people called The True Knot travel in search of sustenance. They look harmless - mostly old, lots of polyester, and married to their RVs. But as Dan Torrance knows, and spunky 12-year-old Abra Stone learns, The True Knot are quasi-immortal, living off the "steam" that children with the "shining" produce when they are slowly tortured to death.
Haunted by the inhabitants of the Overlook Hotel where he spent one horrific childhood year, Dan has been drifting for decades, desperate to shed his father's legacy of despair, alcoholism, and violence.
He meets the evanescent Abra Stone, and it is her spectacular gift, the brightest shining ever seen, that reignites Dan's own demons and summons him to a battle for Abra's soul and survival.

I love Stephen King. He's been one of my favourite authors for a long time now. It all began with It. Sadly, me and Doctor Sleep did not get along as much as I would have liked.

If you've ever wondered what happened to Danny Torrance after he and his mother escaped the hotel and are curious to find out what kind of an adult he becomes, then this is for you.

Nobody that has read or watched The Shining will be surprised to hear that Danny did not turn into a functioning adult but rather into a huge alcoholic mess.

The characters are fleshed out in ways only King can flesh out characters. However, the book lacked punch, and I struggled with the pacing throughout the first half. It starts out in an intriguing way, then loses momentum and doesn't regain it until far later in the book.

For once the villains weren't as scary as they ought to be. In fact, I think alcoholism and Danny's eternal demons were much scarier than the actual vampire like creatures who feed on children with the Shining. I really liked the character of Abra Stone, though. She was definitely a great addition to this book.

All in all, definitely worth a read but not one of King's best.
By Olivia at April 30, 2018
Email ThisBlogThis!Share to TwitterShare to FacebookShare to Pinterest
Labels: horror, stephen king