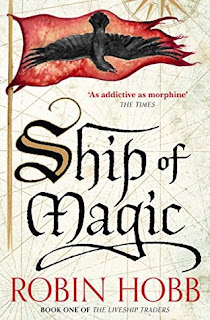 On the northernmost point of the Cursed Shores lies Bingtown, a bustling hub of exotic trade and home to a proud merchant nobility famed for its extraordinary vessels.

Only Bingtown liveships can negotiate the perilous waters of the Rain Wild River and plunder the riches found upstream, but such vessels are made from the most precious commodity in the world – a material with the ability to become sentient – and so are extremely rare.

The fortunes of one of Bingtown’s oldest families rest on the newly awakened liveship Vivacia. For Althea Vestrit, the ship is her rightful legacy. But the fate of Vivacia – and the Vestrits – may ultimately lie in the hands of the dark and charming pirate, Kennit, who lusts after such a ship and has plans of his own.

This is a trilogy. I'll mostly talk about the first book. There are no spoilers in my reviews!

An overview to the Realm of the Elderlings

I began reading Robin Hobb at some point in the last two years and started with the Farseer Trilogy, which is the first trilogy in her series Realm of the Elderlings. I enjoyed it a lot, but I also struggled with it.

First of all, let's look at the Realm of the Elderlings series:

The Liveship Traders and the Rain Wild Chronicles add a lot of depth to the world and the last trilogy ties it all together. I have seen that some people aren't big fans of the Rain Wilds Chronicles and yes it could technically be skipped.

I do highly recommend reading the Liveship Traders, though! I really enjoyed myself. They could be technically read without ever touching any of the other books, they tell a complete story!

Maybe you've noticed the words "but I also struggled with it" up there while mentioning the Farseer Trilogy and now you want to know why.

Robin Hobb's pacing is glacial. The books are too long. I still love them!

Robin Hobb offers her readers wonderful prose and her style is almost literary. Her books are very character driven and a lot of the protagonists spend many pages doing mundane tasks or contemplating their lives.

I'm not a fan of that aspect. It feels like every book starts with a bang, ends with a bang but has a big drawn out middle section.

This is, however, my only complaint so far.

Ship of Magic is fantastic! The entire trilogy is told in third person from different points of views, which adds a variety that the Farseer trilogy, told only from Fitz's point of view, was missing.

I love, love, love the premise. Ships that are alive and are actual characters capable of thoughts and emotions. I never thought I'd root for a wooden ship.

I especially loved the antagonists Hobb created. There's one truly despicable villain, I wanted to strangle most of the time, but Hobb shows us his point of view and in his own story his actions make perfect sense to him. He's literally the hero of his own story and everything he does, is because he believes it's the right thing to do. This adds so much depth to his character and made him enthralling and at the same time my favourite and least favourite part of the book.

There's another character that gets an amazing development across all three books. Again one that you might want to strangle at first but will slowly fall in love with.

Hobb created many great female characters in this trilogy. They kick ass and they save the day!

I don't want to say too much about the plot. Let's just say the liveship Vivacia awakens to a troublesome chapter in the Vestrit's family history. And Kennit, the pirate, really wants to own one of these talking wooden ships!

I don't think I have to recommend this series to Robin Hobb fans, they probably have all read it already, but if you weren't a fan of the Farseer trilogy and would like to read something different by this beloved fantasy author, try this one. (If you happen to be a fantasy fan who has not yet tried Robing Hobb...what are you waiting for?)
By Olivia at April 19, 2018
Email ThisBlogThis!Share to TwitterShare to FacebookShare to Pinterest
Labels: fantasy, robin hobb