A Spider Sat Beside Her by K. E. Lanning 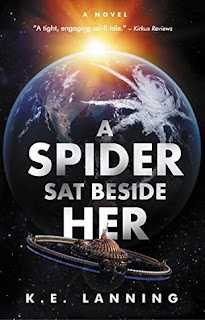 Thank you to K.E. Lanning for this review copy.

The sequel is out and can be found on Amazon.

Plot: Lowry Walker takes a graduate position on the new International Space Station, circling far above a world flooded by oceans and social strife. Her dissertation includes gathering Landsat data over Antarctica, now exposed after global warming has melted the ice caps, but her mission is to heal herself after divorcing an abusive husband.
However, the danger is just beginning--a terrorist attack on the space station embroils her into a political nightmare. In a world drowned by rising seas, territorial battles erupt across the globe, with strong governments stealing land from the weak. Canada and America have merged into the United States of Amerada, with a corrupt political ring in control, and who utilize the assault for their own political purposes. And Lowry is the inconvenient witness...
The Melt Trilogy are novels of speculative science fiction, with an eco-fiction emphasis, delving into the relationship of humans to the Earth. A Spider Sat Beside Her, The Sting of the Bee and Listen to the Birds [2019], will complete trilogy, though each are standalone works.

While I'm intrigued enough to pick up the second book in the trilogy, I was a bit underwhelmed by A Spider Sat Beside Her. The premise is intriguing, the plot promising but I found the characters to be somewhat two-dimensional and flat.

I liked Lowry well enough, but she was naive. So much more naive than I'd expect a divorced woman (coming out of an abusive relationship) to be. The handsome man she falls in love with the moment she sees him? Every single thing he says and does is a bright red flag, and Lowry simply ignores it. I wanted to shake her.

The other people in the story are mostly there to fulfil a role in the story, and the author missed the chance to flesh them out properly.

The writing is solid and the pacing good. Personally, I would have wished for a bit more science, but there were no dull moments, and the mystery is gripping.

The sequel is out and can be found on Amazon.
By Olivia at June 19, 2018
Email ThisBlogThis!Share to TwitterShare to FacebookShare to Pinterest
Labels: ARC, k. e. lanning, sci-fi