A Star-Reckoner's Lot by Darrell Drake 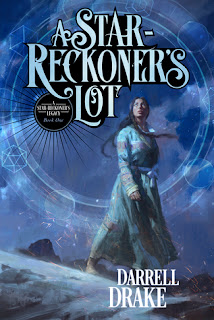 Plot Summary: Ashtadukht is a star-reckoner. The worst there’s ever been.
She commands the might of the constellations…though her magic is as unpredictable as the die rolls that decide its fate. But star-reckoners are humanity’s first defense against divs, so if Ashtadukht is to fulfill her duty, she must use every trick at her disposal—risks be damned.
An excuse. A lie she tells herself. All that remains of a life she should have had. She travels the empire to hunt down the div that brought her world to ruin. The longer her pursuit, the more her memories threaten to consume her. The darker her obsession becomes.
Every spell is a catastrophe waiting to happen, every div a tale of its own, every tale a thread in her tapestry of vengeance. This is the story of her path… a warning to those who would follow in her footsteps.
Ashtadukht is a star-reckoner. The worst there’s ever been. Hers is no hero’s journey.

Thank you, Darrell Drake, for providing me with an ARC of this book.

A hero that is bad at her job? Count me in.

The setting is ancient Iran? Again, count me in.

The magic comes from the stars and is unpredictable? Have I mentioned, count me in?

Ashtadukht is a great character, deeply flawed and well fleshed out. The magic system is fascinating, unpredictable and novel. The setting is fantastic and, from what I could tell, well researched. All in all, A Star-Reckoner's Lot did not disappoint.

Every time Ashtadukht uses her magic she has to consider whether or not it's worth the risk. Power given by the stars and planets can be favourable or not, and sometimes things go terribly wrong. I highly enjoyed reading about a protagonist that can't possibly be overpowered because their magic is unpredictable and might let them down.

While I liked all characters, I absolutely adored Waray. She, and her obsession with eggs, turned out to be the highlight of this book. Waray basically dropped in and stole the show!

Darrell Drake tells the story in a dry, detached tone, which adds humour to the tale. The prose is engaging, not difficult (save for a few complex words, which I had to look up) resulting in a quick, enjoyable read.

The book starts out slow, takes time to introduce the characters, but quickly turns into something I could not put down. At the beginning we follow Ashtadukht through a few assignments, all seemingly unrelated, but once the overarching plot emerged, I realised it was extremely well set up. I have to admit, however, that I got confused a few times along the way. There's time-jumps between the chapters, and it took me a while to find my bearings. There's a few twists and turns I did not see coming, but looking back, they were well-foreshadowed.

I recommend A Star-Reckoner's Lot to any fantasy fan who is looking to pick up more self-published books and enjoys a setting that isn't pseudo-medieval Europe.
By Olivia at June 28, 2018
Email ThisBlogThis!Share to TwitterShare to FacebookShare to Pinterest
Labels: ARC, darrell drake, fantasy