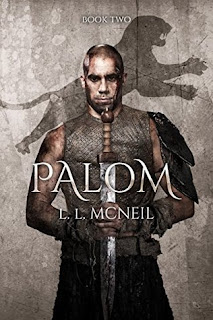 Plot Summary: Palom is the second novel in an epic six-book saga, following a group of characters as war rages across their world. With pirates and soldiers, smiths and princes, Linaria is a vibrant land with a deeply unsettled past and an equally ominous future.

‘Now the fighting’s over, you want to pick up where we left off? How? Everything’s changed.’
Linaria’s cities lie in ruin and her lands are scarred following Aciel’s war. The devastation worsens as dragons turn against the survivors in retribution for Aciel slaying their kin and stealing their power.
As the world attempts to recover from one global war and arm itself against another, Palom, hero and creator of the dragon-forged weapons that thwarted Aciel, flees across the Val Sharis wilds to rid himself of unwanted fame. Overwhelmed by guilt for failing to protect loved ones, his greatest threat is not just the weapons he created, but the new shadow growing over Linaria.
He is accompanied by a dragon hatched in his care - but with the god-like creatures turning against the world, will she be his salvation or destruction?

I received an ARC of Palom from the author in exchange for an honest review, but I also bought it!

Find the author's website here. Find the first book, Moroda, here on Goodreads and here's my review of it.

I always like to get the negative points out of the way first, so I can proceed to gush about the many characters I love. Palom feels a bit slower than Moroda in places. That's mostly because Moroda had an epic conflict going on, and the world of Linaria was in immediate danger. Here, a big portion of the book deals with the fallout of the previous instalment. And, of course, the chess pieces need to be put in place for the third book.

Despite that, it's not a filler book. On the contrary, some of the themes L.L. McNeil deals with are super important and heartbreaking.

We've got Palom, the main character, hailed as a hero, but what happens to the hero after he defeats the enemy? I've often wondered that when reading fantasy books. I would watch the hero fight and kill for the good side, and I'd think, how will you feel once you get to go home? Hello, PTSD.

It's incredible to see a hero after the battle. My heart broke watching him suffer and deal with all the emotional fallout of his past. Palom's struggle to get out of the dark hole he fell into is intense, and it doesn't help that his past lurks just around the corner.

Amarah. The sky-pirate. One of my favourite characters. While Palom struggles not knowing how to move on with his life, Amarah is unwilling to give up. She's broken, but she refuses to let that stop her. I've followed her journey on the edge of my seat, and she continues to be a favourite of mine.

I was a huge fan of Sapora in the first book, but in this one a character emerges, I didn't think I would like quite so much: his sister Isa. She's fantastic. Only part Varkain she shifts into a wild cat instead of a snake, and that's apparently a reason other Varkain think less of her. (I'd like to smack a few of those Varkain by the way, thank you very much.)

Despite my dislike for certain Varkain, the characters I wanted to smack the most were Kohl and Palom. Both for very similar reasons...

We slowly find out more about the characters we got to know in Moroda. What drives them? What is lurking in their past? L.L. McNeil is very good at dripping information into descriptions and conversations, and never dumps it all on the reader at once.

In Palom we get to see the world expand, and we find out more about the history of Linaria. There's a few things that should possibly best be left sleeping, but sigh, when will characters ever learn? The world building is imaginative, with a few very intriguing bits emerging, and I'm excited to find out more in the next book.

L.L. McNeil's prose is straightforward and easy to read, and she moves the plot forward at a good pace. If only the book were longer...I need to know what happens next!

Recommended to people who love dragons, sky-pirates and airships. L.L. McNeil's World of Linaria is a great introduction to fantasy for new fans, but also a treat for old fans of the genre.
By Olivia at July 31, 2018
Email ThisBlogThis!Share to TwitterShare to FacebookShare to Pinterest
Labels: ARC, fantasy, l. l. mcneil