The Library at Mount Char by Scott Hawkins 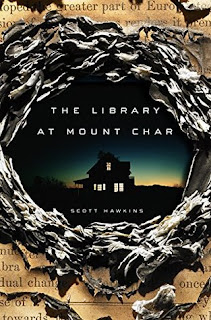 Plot: Carolyn's not so different from the other people around her. She likes guacamole and cigarettes and steak. She knows how to use a phone. Clothes are a bit tricky, but everyone says nice things about her outfit with the Christmas sweater over the gold bicycle shorts.
After all, she was a normal American herself once.
That was a long time ago, of course. Before her parents died. Before she and the others were taken in by the man they called Father.
In the years since then, Carolyn hasn't had a chance to get out much. Instead, she and her adopted siblings have been raised according to Father's ancient customs. They've studied the books in his Library and learned some of the secrets of his power. And sometimes, they've wondered if their cruel tutor might secretly be God.
Now, Father is missing—perhaps even dead—and the Library that holds his secrets stands unguarded. And with it, control over all of creation.
As Carolyn gathers the tools she needs for the battle to come, fierce competitors for this prize align against her, all of them with powers that far exceed her own.
But Carolyn has accounted for this.
And Carolyn has a plan.
The only trouble is that in the war to make a new God, she's forgotten to protect the things that make her human.

If you think the plot sounds weird, then that's because the plot is definitely weird. This isn't your average novel. It's complex and requires attention, but the pieces will start to click into place after a few chapters or, well, at the very least towards the end of the book. Be patient. You'll get your answers.

The story is dark, bleak, confusing and at the same time wondrous.

There isn't a single dull moment in this book. From epic lion battles, to savage dogs, to zombies and psychotic characters, The Library at Mount Char offers everything.

It's compelling. Despite its horrific moments, it's incredibly compelling, and I couldn't put it down. Hawkins didn't just write a unique book, he's also got an unique voice. I especially enjoyed the way he managed to inject humour into the darkness.

The characters are all odd, some downright terrifying, but well developed and fleshed out. Hawkins has a vast imagination. I'm a tiny bit terrified of the man, now.

I don't want to say too much because I believe some books should be enjoyed knowing as little as possible, but this is one I would have never discovered without the invaluable recommendations I get from fantasy friends through Goodreads.

It's one of the most unique books I've ever read, and it's also one of the more darker and more terrifying ones. I'd definitely classify it as horror to a certain extent. I recommend it to people who love horror, fantasy and are looking for a bit different.
By Olivia at September 03, 2018
Email ThisBlogThis!Share to TwitterShare to FacebookShare to Pinterest
Labels: fantasy, horror, scott hawkins