We Ride the Storm by Devin Madson 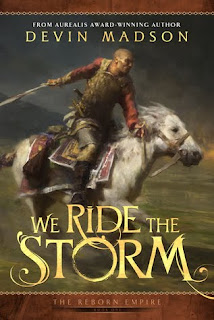 Plot Summary: War built the Kisian Empire and war will tear it down. And as an empire falls, three warriors rise.
Caught in a foreign war, Captain Rah e’Torin and his exiled warriors will have to fight or die. Their honour code is all they have left until orders from within stress them to breaking point, and the very bonds that hold them together will be ripped apart.
Cassandra wants the voice in her head to go away. Willing to do anything for peace, the ageing whore takes an assassination contract that promises answers, only the true price may be everyone and everything she knows.
A prisoner in her own castle, Princess Miko doesn’t dream of freedom but of the power to fight for her empire. As the daughter of a traitor the path to redemption could as easily tear it, and her family, asunder.
As an empire dies they will have to ride the storm or drown in its blood.

Thank you, Devin Madson, for providing me with a review copy of this book. Also a big thank you goes to Esme over at the Weatherwaxreport for setting up TBRindr.

This book is a wild ride filled with non-stop action, fantastic characters and imaginative world-building.

It took me a few chapters to get into it, simply because there's three protagonists and all three of them are written in the first person. At first, I wasn't sure who I was reading about, but once that became clear I could sit back and enjoy the ride.

The characters are incredibly well developed, all three of them are engaging and at no point did I think, I'd rather go back to the previous character. All three have to fight to survive. Rah is exiled from home, Miko is trapped in a patriarchal society, and Cassandra is fighting a mysterious entity inside her own head. Cassandra is probably my favourite character. She's insane, constantly arguing with the voice in her head, but she's also incredibly intelligent, strong and captivating.

The world building focuses on what the reader needs to know to understand the story. No info dumps slow down the story.

The themes are varied but boil down to: greed, honour, back stabbing, loyalty.

This is a book I found hard to put down and the plot moves at a neck-breaking speed with various twists and turns I did not see coming.

We Ride the Storm is a brilliant start to a new fantasy series, and I can't wait for the sequel. Highly recommended to anyone who loves fantasy and doesn't mind that this is a bit low on the magical side.
By Olivia at January 03, 2019
Email ThisBlogThis!Share to TwitterShare to FacebookShare to Pinterest
Labels: devin madson, fantasy