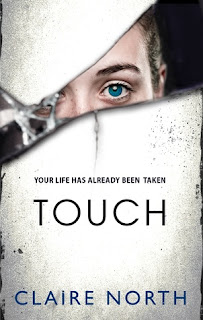 
Plot Summary: Kepler had never meant to die this way — viciously beaten to death by a stinking vagrant in a dark back alley. But when reaching out to the murderer for salvation in those last dying moments, a sudden switch takes place.

Now Kepler is looking out through the eyes of the killer himself, staring down at a broken and ruined body lying in the dirt of the alley.

Instead of dying, Kepler has gained the ability to roam from one body to another, to jump into another person’s skin and see through their eyes, live their life — be it for a few minutes, a few months or a lifetime.

Kepler means these host bodies no harm — and even comes to cherish them intimately like lovers. But when one host, Josephine Cebula, is brutally assassinated, Kepler embarks on a mission to seek the truth — and avenge Josephine’s death.

I've loved Claire North's work ever since I read the First Fifteen Lives of Harry August. By now, she's on my 'will read anything by her' list, and I found Touch to be a compelling, interesting and fascinating novel.

The concept is simple: by touching someone else the protagonist can jump from one body into another, taking on another life like a new skin. The story begins with Kepler, our protagonist, being killed in their latest body, now trying to find out who the mysterious killer is, while at the same time trying to save themselves.

Somebody is after Kepler...

North did a lot with this thought-provoking premise, and her characters are magnificent. Part mystery, part sci-fi thriller, there's never a dull moment. I'm impressed by North's imagination. She seems to be able to come up with enticing concepts and delivers a captivating story each time. The twists are satisfying and many, and, despite the many jumps into new bodies amidst a number of flashbacks, I was never confused. Though, the book requires the reader's full attention.

Kepler is an ambiguous character. One I liked, but definitely wouldn't want to meet. I admire North's prose, and think very highly of her writing skills.

I recommend this to anyone who is either a fan of Claire North's work or finds the premise intriguing. You really can't go wrong with this one.
By Olivia at April 25, 2019
Email ThisBlogThis!Share to TwitterShare to FacebookShare to Pinterest
Labels: claire north, sci-fi