This Savage Song by Victoria Schwab 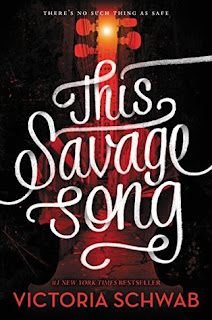 Plot Summary: There’s no such thing as safe in a city at war, a city overrun with monsters. In this dark urban fantasy from author Victoria Schwab, a young woman and a young man must choose whether to become heroes or villains—and friends or enemies—with the future of their home at stake. The first of two books.
Kate Harker and August Flynn are the heirs to a divided city—a city where the violence has begun to breed actual monsters. All Kate wants is to be as ruthless as her father, who lets the monsters roam free and makes the humans pay for his protection. All August wants is to be human, as good-hearted as his own father, to play a bigger role in protecting the innocent—but he’s one of the monsters. One who can steal a soul with a simple strain of music. When the chance arises to keep an eye on Kate, who’s just been kicked out of her sixth boarding school and returned home, August jumps at it. But Kate discovers August’s secret, and after a failed assassination attempt the pair must flee for their lives.

This is one of those books where I felt apprehensive going in and thought that I might not like it. But I was wrong. Oh so wrong.

My only other Schwab novel was A Darker Shade of Magic, which I did not like as much as I thought I would. Basically, it was the other way around. Amazing premise, but I wasn't a fan of the execution.

With This Savage Song, however, I felt lukewarm reading the blurb and absolutely loved the execution.

Schwab is an excellent writer and an even better world-builder. Her characters are fleshed out, real and vulnerable, flawed people, and her setting is intriguing. The pacing is spot on, and the pages fly by, sucking the reader right into the story.

I especially enjoyed her main character, Kate, who is deeply flawed, hot-headed, stubborn, yet kicks ass in the most believable way. Her chemistry with August is incredible, and it did not lead to romance. We need more books with complex relationships and friendships.

This Savage Song convinced me to put Vicious on my list, and I highly recommend it to all Schwab fans, of course, and all urban fantasy fans.
By Olivia at October 02, 2019
Email ThisBlogThis!Share to TwitterShare to FacebookShare to Pinterest
Labels: fantasy, v. e. schwab, young adult