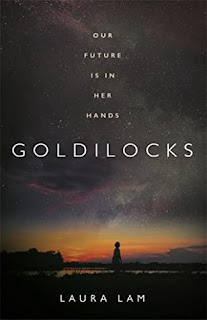 
Plot: Despite increasing restrictions on the freedoms of women on Earth, Valerie Black is spearheading the first all-female mission to a planet in the Goldilocks Zone, where conditions are just right for human habitation.
The team is humanity's last hope for survival, and Valerie has gathered the best women for the mission: an ace pilot who is one of the only astronauts ever to have gone to Mars; a brilliant engineer tasked with keeping the ship fully operational; and an experienced doctor to keep the crew alive. And then there's Naomi Lovelace, Valerie's surrogate daughter and the ship's botanist, who has been waiting her whole life for an opportunity to step out of Valerie's shadow and make a difference.
The problem is that they’re not the authorized crew, even if Valerie was the one to fully plan the voyage. When their mission is stolen from them, they steal the ship bound for the new planet.
But when things start going wrong on board, Naomi begins to suspect that someone is concealing a terrible secret -- and realizes time for life on Earth may be running out faster than they feared.

I got a review copy from NetGalley; this is my honest review. HOWEVER, I'm strongly considering buying it for my partner on Audible. This is exactly the kind of book she reads!

The premise is great. Goldilocks is set in the near future in a world that is on the brink of collapse and women are being forced out of the workplace due to conservative governments. So, it comes as no surprise that Valerie steals the spaceship that was supposed to be hers and takes her all female crew into space despite them having been forced out at the last minute.

The theme of the novel is pretty clear, and I'd even go as far as to say say that the author is throwing it in your face: we're destroying our planet (yup) and conservative governments are a threat to civil rights (no kidding?).

While the theme is a bit on the nose, the antagonist, unfortunately, is similar. Just a bit too much; just a touch too ruthless. To the point where I couldn't quite believe anyone in this position could turn out to be quite so monstrous! (You have to be very angry and bitter to go to the lengths the antagonist goes to and I could never root for someone like that.)

Overall, I felt like only one character (Valerie) was truly fleshed out and interesting, and all other characters, even the narrator remained somewhat bland. For a slow-burning book that centered around the characters for at least the first half, they were just a bit too flat.

However, I couldn't stop reading.

The prose is gorgeous, and I didn't want to put the book down; it kept me interested throughout. There's not a dull moment, and I just had to know what happens.

The science aspects were super interesting, and I enjoyed the relationships between the characters. And I must admit, most of the twists and turns managed to surprise me!

Recommended to all science fiction fans who find the blurb intriguing.
By Olivia at May 20, 2020
Email ThisBlogThis!Share to TwitterShare to FacebookShare to Pinterest
Labels: laura lam, netgalley, sci-fi