Aether Ones by Wendi Coffman-Porter 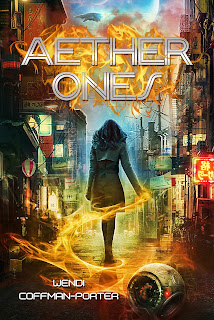 Plot: Leilani Falconi is a top agent for the Imperial Investigative Service, tasked with policing the veil between two realities.

Long ago, the Great Sundering tore the universe into two mirrored halves; aether space, which progressed using magical energy or eldrich, and kuldain, which advanced via electromagnetic technology.

But now a series of suspicious deaths stretching back more than a decade has the agent trapped directly between secretive bureaucracies and their peoples. If she can't solve the mysterious crimes in time, existence as she knows it could erupt into chaos.

I'm a huge science fiction fan and the concept of two mirrored halves—one using magical energy, and one with electromagnetic technology—immediately drew me towards this book.

Just look at that gorgeous cover.

This is a gripping novel where the two opposing worlds are each convinced of their supremacy. Leilani Falconi, the protagonist, spits sarcasm for a living—I'm a sucker for a well-written sarcastic main character as they sadly often come across as condescending or just asshats—and she's willing to sacrifice everything to set things right.

I was rooting for her throughout. She's an excellent main character, who feels real and is three-dimensional.

There is no wasted word in this book. It moves at a breakneck pace, making it almost impossible to set the book down and just breathe. It's almost confusing at first since Coffman-Porter just drops you right into the action without much of an explanation and you just sort of have to learn how to swim.

The world is intriguing and complex, filled with rich detail. One part I especially enjoyed were the military aspects, and it didn't surprise me to find out that the author comes from a military family.

I recommend this book if you're a science fiction fan who doesn't mind a pinch of fantasy. This is a gorgeous mash-up, and I hope Coffman-Porter writes many more books.

By Olivia at February 25, 2021
Email ThisBlogThis!Share to TwitterShare to FacebookShare to Pinterest
Labels: sci-fi, wendi coffman-porter