The Lore of Prometheus by Graham Austin-King 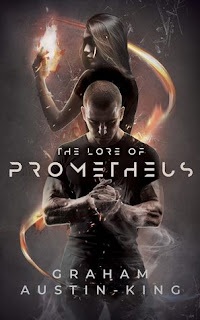 Plot: John Carver has three rules: Don’t drink in the daytime, don’t gamble when the luck has gone, and don’t talk to the dead people who come to visit.
It has been almost five years since the incident in Kabul. Since the magic stirred within him and the stories began. Fleeing the army, running from the whispers, the guilt, and the fear he was losing his mind, Carver fell into addiction, dragging himself through life one day at a time.
Desperation has pulled him back to Afghanistan, back to the heat, the dust, and the truth he worked so hard to avoid. But there are others, obsessed with power and forbidden magics, who will stop at nothing to learn the truth of his gifts. Abducted and chained, Carver must break more than his own rules if he is to harness this power and survive.
The Lore of Prometheus by Graham Austin-King is the winner of #BBNYA2020.
I received this book to read and review as part of a blog tour organised by @The_WriteReads tours team. All opinions are my own.
What did I think?
This is an action-packed standalone (and I must admit sometimes I do miss reading standalones despite my love for long series) with flawed and morally grey characters.

It discusses some very heavy subjects like ptsd and survivor's guilt, and might not be for everyone. In fact, this is a lot grittier than most urban fantasy that I've read so far.

The author explores the impacts of war not only on the surviving soldiers but also on the war-torn countries, and those themes, including the fallout, are handled exceptionally well.

I admire authors who explore these subjects via the means of fantasy and science fiction.

John is an incredibly well-written and fleshed out character with a strong voice, and the humour he added to the bleakness was at times much needed.

Mackenzie is thankfully at no point portrayed as the damsel in distress, and I enjoyed to follow a capable female protagonist, but I must admit, I read this book for John.

The Lore of Prometheus does have a touch of insta-love, and followers of my reviews know that I'm anything but a fan...it felt rushed, and it came out of nowhere.

The other thing that felt a bit rushed to me was the ending. It was abrupt, and I didn't...feel satisfied.

Apart from that I think The Lore of Prometheus is a solid read that I recommend for fans of urban fantasy.
By Olivia at April 20, 2021
Email ThisBlogThis!Share to TwitterShare to FacebookShare to Pinterest
Labels: graham austin king, urban fantasy