The Children of Chaos by Trudie Skies 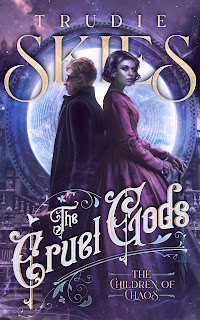 Book Title: The Children of Chaos (The Cruel Gods #2)
Author: Trudie Skies
Genre: Fantasy, Gaslamp, Steampunk
My Rating: ♥ ♥ ♥ ♥ ♥
Source: I beta read this one, but yes, I bought it!

Plot: Chaos stalks the steam-powered city of Chime and threatens the existence of the gods and their domains.
Kayl swore to protect Chime's mortals from their gods' cruel whims, but when she agrees to represent the mortals of a god long thought dead, Kayl is thrust into a political role that goes against everything she's ever stood for.
As the newly appointed ambassador to the god of time, Quen's goal is clear - protect Chime and the domains by any means necessary. But as the gods make their demands, Quen is caught between his loyalties and his conscience.
To ensure a future for all mortals, Kayl and Quen must unite the gods against the threat of chaos and decide what they're willing to sacrifice for Chime - before the gods choose for them.
For the gods are capricious and have their own divine plans.

This is the second book in The Cruel Gods series, and there are no spoilers in this review!

I was a beta-reader for this book, and I'm friends with the author.
That, however, doesn't change or influence how much I love this series. Besides, my gf bought The Children of Chaos on release day, and is now spamming me with live commentary while reading it. She's loving it.

This book does not suffer from middle-book syndrome and that is all you really need to know, so if you like steampunk/gaslamp and British things like biscuits and tea, go ahead, buy it now, and read this series because it's worth it. I swear.

Skies created twelve domains, ruled by twelve gods, and inhabited by twelve mortal races. And in this book we get to explore the domains.

I could just see Netflix pick this one up and set each episode in a different domain and I wouldn't care if they just strolled along a path for forty-five minutes because the domains are just THAT interesting.

Each domain is its own little world, worthy of its own stories. They are incredibly developed, original, and display Skies' endless imagination.

The Children of Chaos is a tad darker, definitely dirtier, and is filled with a lot more explicit language.

And that fits the development of the story.

Personally, I don't like Jinx (that's not to say she's not an excellent character), but Kayl and Quen continue to steal the show and my heart.

And then there is Ben, a Diviner that works for Quen, and of all the new characters Skies introduced in this sequel, Ben is my favourite. Why? Read it and find out. Just kidding. It's Ben's relationship with his god that made him so interesting.

The writing is incredibly...British. It's devilishly charming and witty. I adore Skies' prose.

I cannot wait for the next book and as I said further above, give this one a chance, especially now that the first book is a finalist in 2022's SPFBO competition.

You're not mispronouncing scone, are you?
By Olivia at October 25, 2022
Email ThisBlogThis!Share to TwitterShare to FacebookShare to Pinterest
Labels: fantasy, trudie skies