Life as We Knew It by Susan Beth Pfeffer 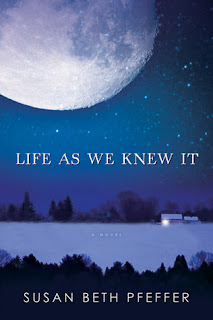 Goodreads Summary: I guess I always felt even if the world came to an end, McDonald’s still would be open. High school sophomore Miranda’s disbelief turns to fear in a split second when an asteroid knocks the moon closer to Earth, like "one marble hits another." The result is catastrophic. How can her family prepare for the future when worldwide tsunamis are wiping out the coasts, earthquakes are rocking the continents, and volcanic ash is blocking out the sun? As August turns dark and wintery in northeastern Pennsylvania, Miranda, her two brothers, and their mother retreat to the unexpected safe haven of their sunroom, where they subsist on stockpiled food and limited water in the warmth of a wood-burning stove.Told in a year’s worth of journal entries, this heart-pounding story chronicles Miranda’s struggle to hold on to the most important resource of all—hope—in an increasingly desperate and unfamiliar world.

I finally signed up to the local library and found out that Overdrive doesn't work with Kindle in the UK. Now, I'm sad. But I have the iPhone 6s Plus, so my screen is just big enough to accommodate book pages. Unfortunately their eBook selection isn't that big. While browsing through the catalog, I stumbled over this book by chance and it sounded interesting. I love dystopias, I love the apocalypse and the idea of the moon causing havoc on earth was an interesting one.

Life as We Knew it only gets a single, lonely star though. Maybe a second one because it is an easy read and sort of entertaining. It's told in the first person from the POV of a teenage girl.

What's wrong with it, you ask? The plot... the science?! Come on. Some research, a teeny tiny bit of research at the very least? Open up Wikipedia at least once? Maybe google moon phases?

The book starts with all astronomers being super psyched about this asteroid hitting our moon. Not one thought it might go wrong. Of course not, because they know science and they're aware our moon can't be knocked out of its orbit by a small rock. Only it is...

Then a bunch of stuff happens. Tsunamis, earthquakes, volcanoes and suddenly the flu. It's like the author was wondering what else could go possibly go wrong on earth? I know: MALARIA.

Of course it didn't help that the sixteen year old teenager named Miranda... I wanted to strangle her. I mean, maybe that's how teenagers are, fair enough, but my reaction to her basically told me if I'm ever found in such a situation with a teenager, I would possibly want the end to come much faster just so I can get away from said teenager.

This book is definitely better off in the hands of a younger YA audience.
By Olivia at August 17, 2016
Email ThisBlogThis!Share to TwitterShare to FacebookShare to Pinterest
Labels: post-apocalyptic, sci-fi, susan beth pfeffer, young adult