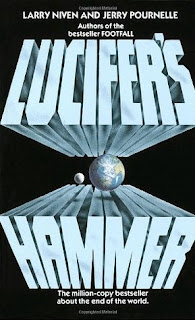 Goodreads Summary: The gigantic comet had slammed into Earth, forging earthquakes a thousand times too powerful to measure on the Richter scale, tidal waves thousands of feet high. Cities were turned into oceans; oceans turned into steam. It was the beginning of a new Ice Age and the end of civilization. But for the terrified men and women chance had saved, it was also the dawn of a new struggle for survival--a struggle more dangerous and challenging than any they had ever known.

What did I think? I loved it. But! Lucifer's Hammer is a reluctant four stars, so don't run out and buy the book just based on that rating. It's without any doubt a very engaging read and once things get going I thought it was a captivating, dark, gritty and realistic read.

A list of things that make this a reluctant four stars:
- Written in 1977, there's racial stereotypes and gender stereotypes that might rub some people the wrong way.
- The first half of the book is exposition and we meet an endless cast of characters and maybe it wasn't necessary to include that many people?
- The portrayal of career driven women, hahaha, okay, 1977, fair enough, but still.
- The portrayal of black people, again uhm, okay 1977, then again, come on.
- The portrayal of Russians, okay, this one is fully allowed, the Cold War was still going in 1977.
- The comet doesn't actually collide with our planet until far far far into the book.

But:
- Humanity goes and becomes nothing but cow-dung once the comet hits. We're talking low. Murder is just the beginning. I don't want to spoil just how low it all goes, but I thought it was interesting. I watch the news these days and look at the current refugee crisis and you know what? I fully believe humanity would sink this low if society fell apart and we neither had food, electricity nor anything else you need to survive an apocalypse.

I thoroughly enjoyed just how far Niven took it and maybe there's too many stereotypes and maybe he's too much of a white male in the way he approached this book, but that didn't stop me from reading this in almost one sitting.

If you like exposition and a big cast of characters and a lot of buildup and would like to read about a comet hitting our planet? This one is for you.
By Olivia at August 22, 2016
Email ThisBlogThis!Share to TwitterShare to FacebookShare to Pinterest
Labels: larry niven, post-apocalyptic, sci-fi