On the Edge of Gone by Corinne Duyvis 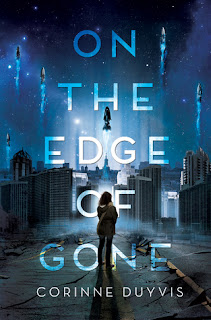 
Goodreads Summary: January 29, 2035. That’s the day the comet is scheduled to hit. Denise and her mother and sister, Iris, have been assigned to a temporary shelter near their hometown of Amsterdam to wait out the blast, but Iris is nowhere to be found, and at the rate Denise’s drug-addicted mother is going, they’ll never reach the shelter in time.
Then a last-minute encounter leads them to something better than a temporary shelter: a generation ship that’s scheduled to leave Earth behind and colonize new worlds after the comet hits. But each passenger must have a practical skill to contribute. Denise is autistic and fears that she’ll never be allowed to stay. Can she obtain a spot before the ship takes flight? What about her mother and sister? When the future of the human race is at stake, whose lives matter most?

What did I think? There's many good things to say about this book and I gave it a high rating, so let me start with the one thing that bothered me. Just so I don't send anyone off with the wrong expectations.

Nothing much happens in this book. Don't expect space, or much of the apocalypse, or much of the aftermath of an apocalypse. Yes, a comet is about to hit the Earth and Denise, the protagonist, and her mother find themselves on board of a generation ship which has not yet taken off. The book tells the story of a girl desperately trying to make herself useful to convince the captain to let her family stay on board.

Not much else happens.

Instead expect a character study. Expect a story about well written characters, their relationships and the important question who gets to survive and why.

It's exceptionally well written. The main character is an autistic, mixed race, Dutch girl and the author writes her well. Corinne Duyvis' narrative in general is very engaging and her voice feels real throughout.

It's sad that we live in a world where a book with a diverse portrayal of gay, trans and mixed race characters deserves extra stars just because of said portrayal. It's also sad that said portrayal needs pointing out and isn't just the standard by now. It's 2016, come on! But it does need pointing out and this book is fantastic when it comes to being inclusive.

I'd recommend it to anyone who likes a slow paced plot where the people matter and not the plot itself.
By Olivia at September 20, 2016
Email ThisBlogThis!Share to TwitterShare to FacebookShare to Pinterest
Labels: corinne duyvis, post-apocalyptic, sci-fi