The Raven King by Maggie Stiefvater 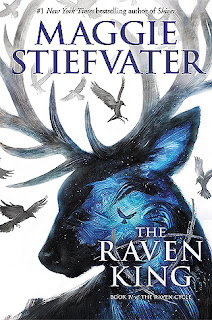 Goodreads Summary of the first book: Every year, Blue Sargent stands next to her clairvoyant mother as the soon-to-be dead walk past. Blue never sees them--until this year, when a boy emerges from the dark and speaks to her. His name is Gansey, a rich student at Aglionby, the local private school. Blue is drawn to Gansey, in a way she can't entirely explain. For as long as she can remember, Blue has been warned that she will cause her true love to die. She doesn't believe in true love, and never thought this would be a problem. But as her life becomes caught up in the strange and sinister world of the Raven Boys, she's not so sure anymore.

What did I think? The Raven Cycle series by Maggie Stiefvater is probably the best Urban Fantasy YA series I've ever read.

I will not talk about the plot much because I don't want anyone to accidentally stumble over spoilers. Let me just say, the plot is unusual, surprisingly creative and refreshing. The books follow four boys and one girl as they embark upon a journey to find a Welsh King in a small town in Virginia.

The characters are fully developed with depth, flaws and the complete shebang to make them feel (sometimes painfully) real. The friendships are so well described, that I couldn't help but fall head over heels in love with all of them.

Blue is a great protagonist, a strong female character, surrounded by a rather crazy but delightful family.
Gansey is driven, brilliant and on a quest to find the King. He's gentle and sometimes aloof, but you can tell he's meticulous and means well. He ties the group together.
Then there's Adam, a lovable character, who is painted as hard working and intelligent. His overall sweetness and integrity, made me think of a precious puppy. We follow his journey to overcome an abusive father and the never ending struggle to have enough money to pay for a private school and escape poverty.
Noah is always a bit in the background, but over the four books we learn so much about him and he's such an important part of the group.
And finally there's Ronan. A mystery in the beginning. Hurt, angry and full of regret. His story is amazing and well developed by Maggie Stiefvater.

Personally, I thought the fourth book, The Raven King, might have been the weakest, but it was still so much better than I ever thought was possible when I picked up the first book.

If you enjoy YA and enjoy Urban Fantasy, do yourself the favor and give this one a chance.

Follow my blog with Bloglovin
By Olivia at September 26, 2016
Email ThisBlogThis!Share to TwitterShare to FacebookShare to Pinterest
Labels: fantasy, maggie stiefvater, urban fantasy