Prince of Thorns by Mark Lawrence 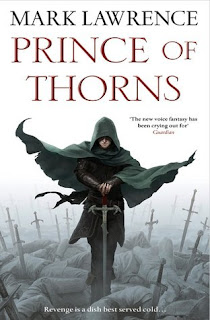 Goodreads summary: From being a privileged royal child, raised by a loving mother, Jorg Ancrath has become the Prince of Thorns, a charming, immoral boy leading a grim band of outlaws in a series of raids and atrocities. The world is in chaos: violence is rife, nightmares everywhere. Jorg has the ability to master the living and the dead, but there is still one thing that puts a chill in him. Returning to his father's castle Jorg must confront horrors from his childhood and carve himself a future with all hands turned against him.
Mark Lawrence's debut novel tells a tale of blood and treachery, magic and brotherhood and paints a compelling and brutal, and sometimes beautiful, picture of an exceptional boy on his journey toward manhood and the throne.

What did I think? I loved Prince of Thorns just like I thought I would.

However I will start with a warning. A warning that I think is necessary: this book isn't for everyone. There's rape. And it's possibly unnecessary rape, maybe just there to show how dark the protagonist really is. Right at the beginning. Right in your face.

Then again... maybe rape is just what happens in a male dominated group that is ransacking and pillaging. And not talking about it would be looking at the world with rose tinted glasses. In which case, maybe it's necessary and leaving it out just wouldn't be believable.

But it's still there. In your face. And I know many people don't appreciate reading about it. And I think that's fair.

The main character, Jorg, is an anti-hero, a broken child and I appreciate a protagonist that isn't all white knight in shining armor. In fact I'm a sucker for a good villain. One I can emphasize with. One I can root for. Jorg is definitely far away from being likable, but he is compelling. The story is told from his point of view and it's fascinating to follow the thoughts of such a dark, intelligent but also insane character, who has given up all hope and humanity.

It's a violent book. Disturbing. Gritty. But at the same time it's beautiful. At its heart it is a tale of revenge.

Prince of Thorns is a quick read and Mark Lawrence's writing is enticing, almost poetic in places. He's excellent at bringing the story to life and does not waste time with pointless descriptions. The world he created is interesting and complex, though not much about it has been revealed yet, but I'm intrigued and hope we'll find out more about in the sequel.
By Olivia at October 28, 2016
Email ThisBlogThis!Share to TwitterShare to FacebookShare to Pinterest
Labels: fantasy, mark lawrence