Two Books for November (and NaNoWriMo) 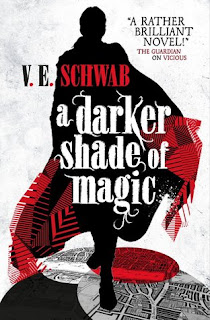 I've just borrowed two new books from the library, one in e-book form. (Sadly our library doesn't have a big selection when it comes to e-books and I rarely find what I'm looking for.) And one physical book, because despite all the love I have for e-readers, I still love a physical book.

First of all I'm looking forward to reading A Darker Shade of Magic. I absolutely love the concept: Grey London is dirty, boring, lacks magic, ruled by mad King George. Red London is where life and magic are revered, and the Maresh Dynasty presides over a flourishing empire. White London is ruled by whoever has murdered their way to the throne. People fight to control magic, and the magic fights back, draining the city to its very bones. Once there was Black London - but no one speaks of that now. How cool does that sound? It almost makes me jealous that I've not come up with this concept. I think there's just so much you can do with this setting and I'm curious to see what V. E. Schwab has done with it.

Besides reading November is always a bit hectic for me because I love to participate in NaNoWriMo and this month I've decided to tackle two projects. A few short stories. 10-20 in total. And on top of that a novella, which I hope will be between 40-50K words once I'm done. My Goodreads challenge is telling me I need to read 24 books until the end of the year and I'm starting to feel the pressure. 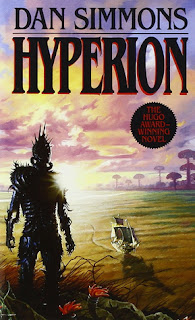 This is the other book I picked up from the library. Science Fiction. I'm not usually a fan of space. I can't bring myself to care when I read about species A having a war with species B, fighting on planet Z that is covered in ice. I like my science fiction to be near future and based on technology. More Black Mirror (how good is the new season?) and less Star Trek. However I thought this summary sounds pretty cool: On the world called Hyperion, beyond the law of the Hegemony of Man, there waits the creature called the Shrike. There are those who worship it. There are those who fear it. And there are those who have vowed to destroy it. In the Valley of the Time Tombs, where huge, brooding structures move backward through time, the Shrike waits for them all. On the eve of Armageddon, with the entire galaxy at war, seven pilgrims set forth on a final voyage to Hyperion seeking the answers to the unsolved riddles of their lives. Each carries a desperate hope—and a terrible secret. And one may hold the fate of humanity in his hands.

I made a list of 24 books I plan to read in the coming 8 weeks and I hope I can stick to it. Basically a bit more than 3 books a week. That's doable, right? Then why did I decide to put books onto that list that are a 1'000 pages long? Why couldn't I just choose 24 novellas?

Have you all finished the GR challenge? Successfully? Or are at least on your way?
By Olivia at November 01, 2016
Email ThisBlogThis!Share to TwitterShare to FacebookShare to Pinterest
Labels: dan simmons, tbr, v. e. schwab