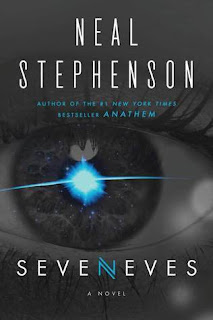 Goodreads Summary: What would happen if the world were ending? A catastrophic event renders the earth a ticking time bomb. In a feverish race against the inevitable, nations around the globe band together to devise an ambitious plan to ensure the survival of humanity far beyond our atmosphere, in outer space.
But the complexities and unpredictability of human nature coupled with unforeseen challenges and dangers threaten the intrepid pioneers, until only a handful of survivors remain . . .
Five thousand years later, their progeny—seven distinct races now three billion strong—embark on yet another audacious journey into the unknown . . . to an alien world utterly transformed by cataclysm and time: Earth.

What did I think? I really like the premise of this book. I mean the moon blows up pretty much in the first sentence and now humanity has to find shelter in space, using the ISS as a starting point. Sounds amazing, right? I was especially excited to read more about the apocalypse and also to find out what happens once the descendants of the survivors come back to Earth.

This is my first Neal Stephenson, and I've picked this one because I really like the possibilities within this premise.

The first third of the book is amazing. Clever characters, an apocalypse, people working together trying to avoid said apocalypse from wiping out humanity. Then Stephenson kind of trails off and in the end he presents a vision of the future that I find entirely too unbelievable for a science fiction book.

If you're into space, astronomy, the ISS and want to know as much as possible about them, while at the same time reading about the end of humanity as we know it, then this is definitely the book for you.
By Olivia at November 11, 2016
Email ThisBlogThis!Share to TwitterShare to FacebookShare to Pinterest
Labels: neal stephenson, sci-fi