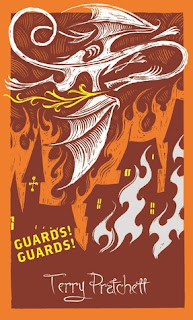 Goodreads Summary: Here there be dragons . . . and the denizens of Ankh-Morpork wish one huge firebreather would return from whence it came. Long believed extinct, a superb specimen of draco nobilis ("noble dragon" for those who don't understand italics) has appeared in Discworld's greatest city. Not only does this unwelcome visitor have a nasty habit of charbroiling everything in its path, in rather short order it is crowned King (it is a noble dragon, after all.)
Meanwhile, back at Unseen University, an ancient and long-forgotten volume--The Summoning of Dragons--is missing from the Library's shelves. To the rescue come Captain Vimes, Constable Carrot, and the rest of the Night Watch who, along with other brave citizens, risk everything, including a good roasting, to dethrone the flying monarch and restore order to Ankh-Morpork (before it's burned to a crisp).

What did I think? When Terry Pratchett died last year, I was, just like the rest of Britain, very sad. Because he's a legend and because Neil Gaiman loved him and I love Neil Gaiman. But at the back of my mind I knew, I'm not a Discworld fan. I enjoyed 'The Colour of Magic' but I didn't love it. Many people told me to start with 'Equal Rites' or maybe 'Mort'. Or 'Guards! Guards!' You'll love that one, they said.

I tried 'Good Omens' last year, the book he wrote with Neil Gaiman, thinking that should work for me, but it didn't either. I just didn't find it funny. Is something wrong with me?

This year I promised myself to read 'Mort', 'Equal Rites' and 'Guards! Guards!' before I make up my mind on whether or not to dive further into the Discworld novels.

I'm sorry to say I didn't like 'Guards! Guards!'. Don't get me wrong. I can appreciate what Pratchett did here, which is why I'm giving it three stars. But it did not make me chuckle once, it did not entice me and I'm not interested in discovering more about the City Watch or Discworld.

I enjoyed the parodies of fantasy tropes, but at the same time I thought they were over the top. I didn't dislike the characters but I wasn't invested in them and to be honest the story more or less bored me. At least it was a quick and easy read.

I feel like I'm committing a crime... maybe this is the moment to admit, I don't like Monty Python either? I'll be over there in that corner. Sorry.
By Olivia at November 08, 2016
Email ThisBlogThis!Share to TwitterShare to FacebookShare to Pinterest
Labels: discworld, fantasy, terry pratchett