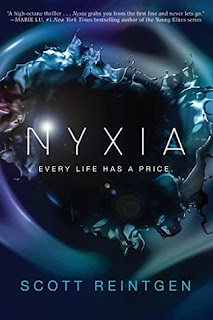 Goodreads Summary: Emmett Atwater isn’t just leaving Detroit; he’s leaving Earth. Why the Babel Corporation recruited him is a mystery, but the number of zeroes on their contract has him boarding their lightship and hoping to return to Earth with enough money to take care of his family.
Before long, Emmett discovers that he is one of ten recruits, all of whom have troubled pasts and are a long way from home. Now each recruit must earn the right to travel down to the planet of Eden—a planet that Babel has kept hidden—where they will mine a substance called Nyxia that has quietly become the most valuable material in the universe.
But Babel’s ship is full of secrets. And Emmett will face the ultimate choice: win the fortune at any cost, or find a way to fight that won’t forever compromise what it means to be human.

What did I think? Young Adult in space? Sign me up! Those were my thoughts when I requested this title from Netgalley. I ended up having a lot of fun with the story and read it during a long, sleepless night.

Ten teenagers are on board this spaceship on its way to a planet called Eden. They're being trained to mine a new element called Nyxia... but only eight out of the ten will be allowed to do so. Let the competition begin!

This book has a great and varied ensemble. For the average reader the beginning might be a bit overwhelming, since ten teenagers are introduced. It took me a while before I was able to keep them straight, but Reintgen made sure to give each one an individual voice. They're all well developed, and by the end I felt like I knew them all.

I recommend this to fans of Young Adult (who don't mind books aimed at the younger end of the YA audience) and Science Fiction novels, who are looking for something like the Hunger Games, Ender's Game or The 100.
By Olivia at September 12, 2017
Email ThisBlogThis!Share to TwitterShare to FacebookShare to Pinterest
Labels: netgalley, sci-fi, scott reintgen, young adult