The City & The City by China Miéville 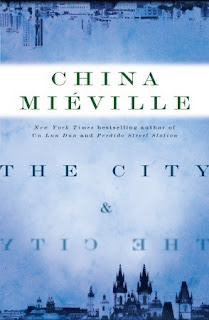 Goodreads Summary: When the body of a murdered woman is found in the extraordinary, decaying city of Beszel, somewhere at the edge of Europe, it looks like a routine case for Inspector Tyador Borlú of the Extreme Crime Squad. But as he probes, the evidence begins to point to conspiracies far stranger, and more deadly, than anything he could have imagined. Soon his work puts him and those he cares for in danger. Borlú must travel to the only metropolis on Earth as strange as his own, across a border like no other.

What did I think? Do you know what it feels like when the premise sounds absolutely amazing, but you don't like the story set in it? That's what happened to me with The City & The City.

The setting of the book is what intrigued me in the first place. Two separate cities existing within the same geographical area, at the same time and citizens of one city are prohibited from interacting with, or even looking at citizens of the other city. It's a brilliant concept and through it the author can look at cultural differences, segregation and how we're capable of going about our lives without noticing the homeless man in the corner.

I was looking forward to finding out more about the two cities and how it came about that they occupy the same space at the same time, but the author decided to set a simple, classic noir detective story into this setting...

The writing is gorgeous. China Miéville has a way with words. The pacing is somewhat slow, at least at first but once the story gets going it really picks up.

It's a great blend of crime and fantasy, unfortunately I was more interested in the fantasy aspect and the author seemed intent on focusing on the mystery.
By Olivia at September 11, 2017
Email ThisBlogThis!Share to TwitterShare to FacebookShare to Pinterest
Labels: china miéville, fantasy, mystery