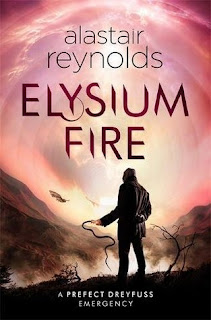 Goodreads Summary: Featuring Inspector Dreyfus - one of Alastair Reynolds most popular characters - this is a fast paced SF crime story, combining a futuristic setting with a gripping tale of technology, revolution and revenge.

One citizen died a fortnight ago. Two a week ago. Four died yesterday and unless the cause can be found - and stopped - within the next four months, everyone will be dead. For the Prefects, the hunt for a silent, hidden killer is on.

Alastair Reynolds has returned to the world of The Prefect for this stand-alone SF mystery in which no one is safe. The technological implants which connect every citizen to each other have become murder weapons, and no one knows who or what the killer is - or who the next targets will be. But their reach is spreading, and time is not on the Prefects' side.

This is a standalone novel but it is the second in a series. The first book used to be called The Prefect and is now titled Aurora Rising.

There's a short story here on Gollancz's website which introduces the characters and makes it even easier to read Elysium Fire without having read Aurora Rising.

Alastair Reynolds fans will certainly be pleased to hear that Prefect Tom Dreyfus has returned. This is my first Reynolds novel, and, despite it being the second in a series, I had no trouble diving straight in, and I've already picked up a few more books by him.

Elysium Fire is a complex novel with many memorable characters. Dreyfuss especially is an intriguing figure. The world building is complex and I adore the care Reynolds put into this universe. It's very detailed and believable. The aspect I probably enjoyed the most is the technology used in this book. Reynolds writes hard science fiction and his vision of the future surprised and impressed me.

Elysium Fire is essentially a mystery novel, so I don't want to spoil anything, but the plotting is complex and Reynolds masterfully weaves several story lines together.

I highly recommend Elysium fire to fans of mysteries set in space and, of course, any Reynolds fans should pick this one up immediately.
By Olivia at January 25, 2018
Email ThisBlogThis!Share to TwitterShare to FacebookShare to Pinterest
Labels: alastair reynolds, netgalley, sci-fi