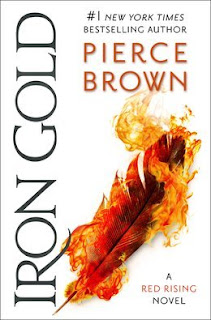 SPOILERS FOR THE ORIGINAL RED RISING SERIES CAN BE FOUND IN THE GOODREADS SUMMARY.

Goodreads Summary: A decade ago, Darrow was the hero of the revolution he believed would break the chains of the Society. But the Rising has shattered everything: Instead of peace and freedom, it has brought endless war. Now he must risk everything he has fought for on one last desperate mission. Darrow still believes he can save everyone, but can he save himself?
And throughout the worlds, other destinies entwine with Darrow’s to change his fate forever: A young Red girl flees tragedy in her refugee camp and achieves for herself a new life she could never have imagined. An ex-soldier broken by grief is forced to steal the most valuable thing in the galaxy, or pay with his life. And Lysander au Lune, the heir in exile to the sovereign, wanders the stars with his mentor, Cassius, haunted by the loss of the world that Darrow transformed, and dreaming of what will rise from its ashes.

I am always worried when I pick up a sequel to a beloved series. Worried I might be disappointed or that something terrible could happen to some of my favourite fictional characters.

Halfway through Iron Gold a certain disappointment did start to seep through. I felt like I wasn't connecting with the book and the characters. Thankfully, the second half of the book grabbed me and by the end I was excited to read more.

A similar thing happened with Red Rising. I liked it but didn't love it, and then...Golden Son blew my mind.

Iron Gold is told from the point of view of four characters and not just Darrow like Red Rising. At first I didn't really care much for the other characters, and because the first half is mostly set-up and moves considerably slower than the second half it wasn't until much later that I discovered that I was suddenly attached to everyone.

Pierce Brown's writing is elegant. He excels at fast-paced action scenes and can really crush your heart with emotional moments.

If you liked the Red Rising series don't hesitate and give this one a try.
By Olivia at February 07, 2018
Email ThisBlogThis!Share to TwitterShare to FacebookShare to Pinterest
Labels: pierce brown, sci-fi