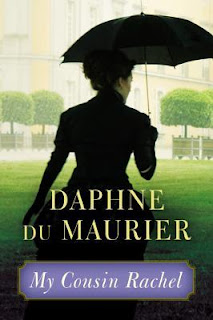 Goodreads Summary: Orphaned at an early age, Philip Ashley is raised by his benevolent older cousin, Ambrose. Resolutely single, Ambrose delights in Philip as his heir, a man who will love his grand home as much as he does himself. But the cosy world the two construct is shattered when Ambrose sets off on a trip to Florence. There he falls in love and marries - and there he dies suddenly. Jealous of his marriage, racked by suspicion at the hints in Ambrose's letters, and grief-stricken by his death, Philip prepares to meet his cousin's widow with hatred in his heart. Despite himself, Philip is drawn to this beautiful, sophisticated, mysterious Rachel like a moth to the flame. And yet... might she have had a hand in Ambrose's death?

Books (and films) with open and ambiguous endings are my favourite kind of entertainment. I love when I, as a reader, get to make up my own mind based on all the clues and evidence the author has handed me.

My Cousin Rachel is written by the wonderful Daphne du Maurier who also wrote Rebecca. While I preferred Rebecca over all, I was simply smitten by du Maurier's descriptive and beautiful writing. The tale is dark and twisted with a Gothic atmosphere, and filled with moments of uncertainty. From the very start I thought Rachel was guilty, only to doubt myself a few pages later.

It's basically a psychological thriller.

What an amazing character Rachel is. Complex and vulnerable, but also scheming and manipulative. Then there's Philip, our narrator. Oh Philip. Naive and adoring, I kept wanting to hug him, then yell at him to wake up on the very next page. Wonderful character development made this book a treat.

I really don't want to give anything else away. I recommend My Cousin Rachel to all fans of Du Maurier and everyone who likes a suspenseful Classic. Now, just have to watch the film! I hope it's as good as the book.
By Olivia at February 28, 2018
Email ThisBlogThis!Share to TwitterShare to FacebookShare to Pinterest
Labels: classics, daphne du maurier