Daughter of the Empire by Feist and Wurts 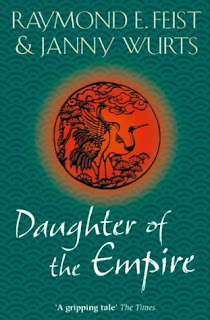 Goodreads Summary: Mara, the youngest child of the ancient and noble Acoma family, is about to take her pledge of servitude to the goddess Lashima when the ceremony is disrupted by news of her father and brother’s death in battle.
Despite her grief, as the only surviving member of her house, Mara must now take up the mantles of Ruling Lady. But she soon discovers betrayal at the heart of her family’s loss, and the Acoma’s enemies have brought her house to the brink of utter destruction.
Mara, an inexperienced political player, must draw on all her wit, intelligence and cunning to navigate the ruthless Game of the Council, regain the honour of House Acoma and secure the future of her family. But with assassins waiting around every corner, it might take everything Mara has simply to survive.

In which order to read Raymond E. Feist and where does the Empire trilogy slot in? Raymond E. Feist has a reading order for his Riftwar Cycle on his website. He does say to read the initial Riftwar Saga trilogy FIRST, before diving into the Empire Trilogy.
But...I'm a rebel. Okay no, I'm kidding. A Goodreads group of mine did a buddy read of this, and I joined despite not having read the Riftwar Saga first. It took me a few chapters to get into the book and I've had a few confusing moments regarding world building and magic system that probably would have been answered in the Riftwar Saga, but I understood everything and think it's possible to read this trilogy its own.

What a wonderful book. Daughter of the Empire is set in a world inspired by Asia. There's not a lot of magic, instead it's all about intrigue and politics.  In addition, expect a kick-ass female character.

Mara is simply one of the best female fantasy characters I've ever encountered. She is cunning and intelligent. This entire book is one big chess game filled with politics and betrayal, and Mara does not use strength and violence to win this game but her wit. It's a joy to watch her decimate her opponents using only her brain. More of this, please.

The entire cast of characters is well developed. The villains are intriguing and relatable. On one page you want to punch them, on the next they break your heart! There was one scene especially which was a punch in the gut, and only a few pages prior I thought I'd be throwing a party.

I recommend this to anyone who loves fantasy with a lot of politics and intrigue. If several houses attempting to outwit each other in a bid to rule appeals to you, then this is for you. If you're at all interested in Feist's work and the rest of the Riftwar Cycle, start with the Riftwar Saga Trilogy before you dive into the Empire Trilogy.
By Olivia at March 02, 2018
Email ThisBlogThis!Share to TwitterShare to FacebookShare to Pinterest
Labels: fantasy, janny wurts, raymond e. feist