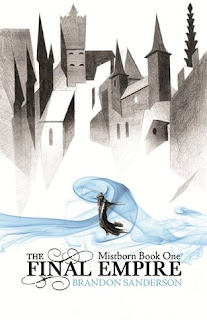 Book Title: The Final Empire (Mistborn #1)
Author: Brandon Sanderson
Genre: Fantasy, (On the YA side, but not strictly YA)
My Rating: ♥ ♥ ♥
Source: Own a Kindle copy

Goodreads Summary: A thousand years ago evil came to the land and has ruled with an iron hand ever since. The sun shines fitfully under clouds of ash that float down endlessly from the constant eruption of volcanoes. A dark lord rules through the aristocratic families and ordinary folk are condemned to lives in servitude, sold as goods, labouring in the ash fields.
But now a troublemaker has arrived and there is rumour of revolt. A revolt that depends on criminal that no-one can trust and a young girl who must master Allomancy - the magic that lies in all metals.

Brandon Sanderson. For some the best fantasy author currently writing. For others a great introduction to fantasy but ultimately a gateway to more complex books. I stand neither here nor there. We simply haven't connected yet. I attempted The Way of Kings, back in 2016 and gave up halfway through (in the UK it was published in two volumes and I only read the first).

I finally decided to read the first Mistborn novel...and I liked it. I guess?

Brandon Sanderson is an author I highly admire for his interactions with fans and his writing lessons. Any aspiring fantasy authors should check out his YouTube channel and watch some of his classes. He's inspiring, a machine, plots like no one else and his magic systems are intricate and extremely well developed.

With Sanderson you know the next book is just around the corner and you also know his plot will have a huge payoff, because he's an extensive planner.

To me it feels...sterile? Formulaic? At least to a certain extent. I enjoyed the book, but I didn't fall in love with any of the characters and so far I haven't felt the need to pick up the sequel. His writing is very functional. His characters feel just developed enough, and the plot comes across as meticulously planned. Maybe that's the problem? I'm a chaotic being at heart and maybe I can just feel the planning ooze from the pages and it makes me feel uncomfortable.

I'm in the absolute minority, so don't listen to me. Every fantasy fan will tell you to give this a try and it's a great introduction to the genre. So, go ahead and do the only right thing: try it for yourself.
By Olivia at March 12, 2018
Email ThisBlogThis!Share to TwitterShare to FacebookShare to Pinterest
Labels: brandon sanderson, fantasy