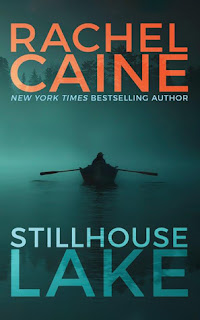 
Goodreads Summary: Gina Royal is the definition of average—a shy Midwestern housewife with a happy marriage and two adorable children. But when a car accident reveals her husband’s secret life as a serial killer, she must remake herself as Gwen Proctor—the ultimate warrior mom.
With her ex now in prison, Gwen has finally found refuge in a new home on remote Stillhouse Lake. Though still the target of stalkers and Internet trolls who think she had something to do with her husband’s crimes, Gwen dares to think her kids can finally grow up in peace.
But just when she’s starting to feel at ease in her new identity, a body turns up in the lake—and threatening letters start arriving from an all-too-familiar address. Gwen Proctor must keep friends close and enemies at bay to avoid being exposed—or watch her kids fall victim to a killer who takes pleasure in tormenting her. One thing is certain: she’s learned how to fight evil. And she’ll never stop.

This was a book I swallowed in more or less one sleepless night. The premise is very interesting: the wife of a serial killer, who can't believe she didn't realise her husband had a secret life hidden away in the garage, must protect herself and her children in the aftermath of her husband's conviction.

The plot is fast-paced, heart-stopping and Gwen/Gina is a wonderfully developed protagonist. The atmosphere is spooky, gripping and tense. The opening alone makes the book worth a read. It opens with a literal bang, and I just had to know what happens next.

One aspect that makes the book quite scary is how careful Gwen is when it comes to the Internet. Even though she's changed her name, is hidden away in a remote place (uh-hoh, right?) and cut all ties, Internet trolls still find her. The time and effort these trolls invest, hunting someone down just because it's fun and they're bullies...and such people are real.

I recommend this to everyone who likes their thrillers dark and twisted and thankfully the sequel is out.
By Olivia at March 06, 2018
Email ThisBlogThis!Share to TwitterShare to FacebookShare to Pinterest
Labels: rachel caine, thriller