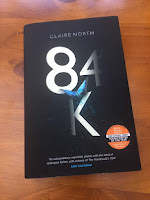 This Sunday I went to MCM Comic Con in London at the Excel, because they had an author corner, and, well, I'm a geek, and I really wanted to see Adrian Tchaikovsky and tell him I love his books.

Upon arrival, we headed straight to the stand of Forbidden Planet (an amazing bookshop in the UK, that also sells a ton of memorabilia and everything geek, comic, and cool) and looked at the books they had.

Claire North was going to be there. I loved her book The First Fifteen Lives of Harry August, and I love the premise of 84K. I'd seen the cover on Twitter and have been wanting to read this ever since I first spotted it.

I do want to read her other books as well. Here's the blurb for 84K: 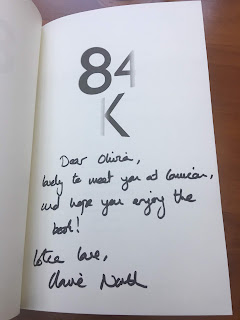 Theo Miller knows the value of human life - to the very last penny.

Working in the Criminal Audit Office, he assesses each crime that crosses his desk and makes sure the correct debt to society is paid in full.

But when his ex-lover is killed, it's different. This is one death he can't let become merely an entry on a balance sheet.
Because when the richest in the world are getting away with murder, sometimes the numbers just don't add up.

Well, it does to me.

I obviously needed a book for Adrian Tchaikovsky to sign, so I grabbed the one I liked most so far: Dogs of War. (Read my review of  his Guns of the Dawn here. It's essentially, Elizabeth Bennet goes to war. Very austenesque, but also flintlock fantasy.) 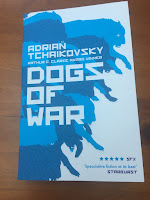 It adopts her sister’s personality, recreating her through a life lived online. But this virtual version of her knows things it shouldn’t be possible to know.
It’s almost as if the missing girl is still out there somewhere, feeding fresh updates into the cloud. But that’s impossible. Isn’t it?

And finally, Vic James was going to be signing the second book in the Dark Gifts Trilogy (the first is Gilded Cage and my review can be found here.)

Whoops, that was lots of money gone in only 10 minutes.

I texted my partner, basically saying: whoops, that was lots of money gone in only 10 minutes. Thankfully, she just sent back one of those laughing emojis, so I think we're all good! 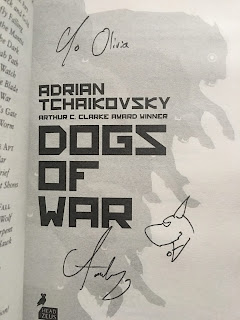 In the afternoon, the signing was happening, and I suddenly realised...I know these people by name. I know their covers. I know their Twitter handle. I DO NOT KNOW THEIR FACES.

Excuse me, are you one of my favourite authors?

Hm. Thankfully, other people knew better and I just checked which books they got signed, and hoped they got it right.

I first caught Heather Child and Claire North. Also, Claire North is a pseudonym, of which she has two. I wasn't even sure which of her 3 names was actually her real one. Hm.

I blabbed a lot, when I gave her the book to sign. That I loved Harry August, that I loved her writing, that I've been waiting for this one forever etc. I felt slightly embarrassed as I walked away to find a hole somewhere to disappear. Forever.

I told Heather Child, that I hadn't read her book yet, but heard good things and she looked surprised. Don't look surprised that your marketing campaign is working!

Then we attended a panel with Vic James and Adrian Tchaikovsky, where they were interviewed by someone who had clearly never met an author before and asked ridiculous questions. 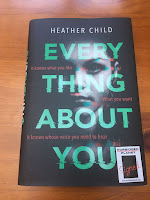 At the end, two people from the audience got to ask a question and the authors were asked, what they thought of writers like George Martin never finishing his work.

My friend next to me: YOU CAN'T ASK THAT!

They gave good answers though (which basically and essentially said: it's the author's business whether or not they finish a series, and that if not, we'll always have the show.)

Then, I went to tell Adrian Tchaikovsky that I love all of his books and that he's one of my favourite authors, and promptly felt embarrassed again. He drew a little dog into my book and told me that this one is his favourite as well. So, I've chosen well! Thankfully, I've got so much by him that I've not read yet! 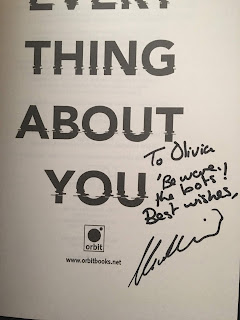 Finally, Vic James. The lady turned out to be absolutely brilliant. I told her, I'd read the first one and loved it. She asked me who my favourite character was.

My brain in that moment: I READ THIS SEVERAL MONTHS AGO WHAT WERE THEIR NAMES???

The next thought: I honestly don't know which is my favourite character, I love them all?

So, I looked embarrassed, yet AGAIN. I told her, that my sympathies have been swinging back and forth. That, I really liked the concept. That I thought her work was original and new, and that I couldn't wait to read the second one.

She was more interested in my friend's cupcakes and her Pop Figure of a Game of Thrones dragon (no, I do not remember character names well!) and I'm actually kidding. She looked very chuffed and even hugged me. Very impressive lady, and a very impressive Young Adult trilogy. 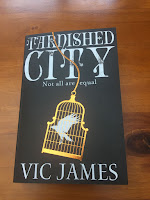 There's a lot of politics in these books, and I found out she's a current affairs director for the BBC, so I guess that explains that! Can't wait to dive into Tarnished City.

Here's the blurb for Gilded Cage:

In modern-day Britain, magic users control everything: wealth, politics, power—and you. If you’re not one of the ultimate one-percenters—the magical elite—you owe them ten years of service. Do those years when you’re old, and you’ll never get through them. Do them young, and you’ll never get over them.

This is the darkly decadent world of Gilded Cage. In its glittering milieu move the all-powerful Jardines and the everyday Hadleys. The families have only one thing in common: Each has three children. But their destinies entwine when one family enters the service of the other. They will all discover whether any magic is more powerful than the human spirit. 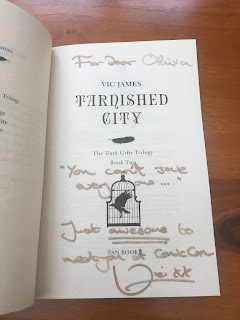 And finally, before I end this long blog post, let me also share Adrian Tchaikovsky's blurb of his Dogs of War:

My name is Rex. I am a good dog.
Rex is also seven foot tall at the shoulder, bulletproof, bristling with heavy calibre weaponry and his voice resonates with subsonics especially designed to instil fear. With Dragon, Honey and Bees, he's part of a Multiform Assault Pack operating in the lawless anarchy of Campeche, south-eastern Mexico.

Rex is a genetically engineered Bioform, a deadly weapon in a dirty war. He has the intelligence to carry out his orders and feedback implants to reward him when he does. All he wants to be is a Good Dog. And to do that he must do exactly what Master says and Master says he's got to kill a lot of enemies.

But who, exactly, are the enemies? What happens when Master is tried as a war criminal? What rights does the Geneva Convention grant weapons? Do Rex and his fellow Bioforms even have a right to exist? And what happens when Rex slips his leash?

I met authors on Sunday, and it was a great day!
By Olivia at June 01, 2018
Email ThisBlogThis!Share to TwitterShare to FacebookShare to Pinterest
Labels: adrian tchaikovsky, claire north, heather child, james vic, personal