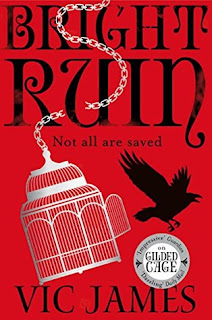 I borrowed the first book, Gilded Cage, from the library, loved it a lot and bought the second book, Tarnished City, as a paperback and now requested Bright Ruin from Netgalley, but I will buy it.

Goodreads Summary of the first book so there's no spoilers for the trilogy: In modern-day Britain, magic users control everything: wealth, politics, power—and you. If you’re not one of the ultimate one-percenters—the magical elite—you owe them ten years of service. Do those years when you’re old, and you’ll never get through them. Do them young, and you’ll never get over them.
This is the darkly decadent world of Gilded Cage. In its glittering milieu move the all-powerful Jardines and the everyday Hadleys. The families have only one thing in common: Each has three children. But their destinies entwine when one family enters the service of the other. They will all discover whether any magic is more powerful than the human spirit.
Have a quick ten years...

As usual there will be NO plot spoilers as this is the THIRD book in a trilogy.

What a fantastic finale.

I love the Dark Gifts trilogy, to the point where I'd possibly declare this as my favourite YA fantasy.

The premise is very simple, political, and, in our current political climate, just a tiny bit terrifying. This is a world, an alternative modern-day Britain, where commoners are required to serve as slaves for ten years during which they lose all basic human rights. The protagonists set out to serve at the beginning of the first book, and I expected it to be mostly about their struggle for freedom with a healthy dose of rebellion...

Vic James, however, doesn't just write from the point of view of the ones suffering. Instead, we get to see the story from the perspective of the ruling Equals as well, and they're not all bad. Some are in favour of the slavery, some are downright cruel, others are fighting to abolish the slavery. There's lots of politics in these books, and I think that was one of the reasons I enjoyed it so much.

The characters are layered, well developed and the writing is enjoyable. The world building is not just your average dystopia but innovative and captivating.

The plot took a few turns I didn't expect, and I slowly grew to like all characters, even love some of them, and increasingly worried about their safety. What I thought was going to be a mildly annoying romance in the first book, turned out to be an interesting plot point, that I thoroughly enjoyed. In fact, the entire Dark Gifts trilogy is not your average YA fantasy; it's original and surprising. The first book has a hopeful tone, but the second book turns much darker, and the mood is sombre. The third book finds the balance between the two.

All in all, it's a wild ride. I was never quite sure how things were going to turn out. I worried everyone I loved would be dead by the end, and I must admit my heart was a tiny bit broken when I reached the last page of Bright Ruin.

I met Vic James at a convention in London, and she kindly signed my copy of Tarnished City. She asked me which character is my favourite, and I did not know what to answer, and may have flailed a little bit. Hours later, I realised, what I should have said: politics! Because the political aspect is what I enjoy most about these books.

Besides the politics, there's Silyen, and surprisingly enough Gavar. And, of course, Luke and Abi.

The ending does not disappoint. Vic James ties all loose ends together, and, just like in the real world, not everyone gets what they deserve.

I highly recommend the Dark Gifts trilogy to YA fantasy fans, who are looking for a book with lots of politics.
By Olivia at July 18, 2018
Email ThisBlogThis!Share to TwitterShare to FacebookShare to Pinterest
Labels: dystopia, fantasy, vic james, young adult