The Tropic of Eternity by Tom Toner 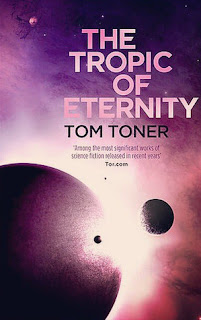 Plot Summary, without spoilers: It is the 147th century.
In the radically advanced post-human worlds of the Amaranthine Firmament, there is a contender to the Immortal throne: Aaron the Long-Life, the Pretender, a man who is not quite a man.
In the barbarous hominid kingdoms of the Prism Investiture, where life is short, cheap, and dangerous, an invention is born that will become the Firmament’s most closely kept secret.
Lycaste, a lovesick reclusive outcast for an unspeakable crime, must journey through the Provinces, braving the grotesques of an ancient, decadent world to find his salvation.
Sotiris, grieving the loss of his sister and awaiting the madness of old age, must relive his twelve thousand years of life to stop the man determined to become Emperor.
Ghaldezuel, knight of the stars, must plunder the rarest treasure in the Firmament—the object the Pretender will stop at nothing to obtain.
From medieval Prague to a lonely Mediterranean cove, and eventually far into the strange vastness of distant worlds, this series is filled with gripping action and astounding ambition unfolding over hundreds of thousands of years, marking the arrival of a brilliant new talent in science fiction.

As usual no spoilers.

Here's my review of the first book.

I got the first book from Netgalley but bought it afterwards because I loved it so much. I also bought the second book and will buy this one, but for now I've got a review copy from Netgalley in exchange for an honest review.

Tom Toner may be the Steven Erikson of Science Fiction, because he drops the reader straight into an unfamiliar world without any explanation.

I'm a fast reader and sometimes tempted to skim more than I should, which works with books set on our world where not every third word is strange and unfamiliar. After reading a third of the first novel, about two years ago, I almost put it away for good, because I had no idea what was going on. I decided to re-start from the beginning and take my time.

I admit, I had to take notes, and while reading the second book I frequently had to use the glossary and look up names, races and places.

Throughout the third book, however, I finally felt like I belonged in this world and was able to navigate without feeling lost.

I've hardly ever been this immersed in a world. Tom Toner presents a world so rich and so fleshed out, I was blown away by every page. It's a creative mix between sci-fi and fantasy presenting an innovative future filled with diverse, unique cultures and breathtaking ideas. The scope alone is immense and the level of complexity, frankly, insane.

More than once I thought: how did he come up with all of this?

At one point, during the second book, I looked up at my partner and said: this is absolutely brilliant.

The books are very complex. While I personally don't mind not knowing what's going on for a good portion of a book, I think Toner expects a lot from the reader. There's a vast cast of characters to keep track of, next to a dozen species and planets.

The prose is wonderful, very descriptive, filled with lush details and striking visuals.

I love all the characters, but I've got a soft spot for Percy and Aaron in particular. The entire cast is fleshed out, well-developed and I find them all incredibly intriguing. I wasn't entirely sold on Lycaste at first, but Toner develops him in fascinating ways, and I grew quite fond of him.

The third book is almost non-stop action, the chapters move with a sense of urgency as an epic conflict unfolds. While this is not the last book in the series it does end on a hopeful note with a few touching chapters at the end that made me smile.

Toner has definitely created something ambitious and memorable, and I am eagerly awaiting new books by him.

I recommend The Amaranthine Spectrum series (for the love of everything, please start with the first book) to everyone who likes a complex and epic plot spanning centuries, and beautiful prose. I think both fans of Gene Wolfe as well as Steven Erikson will appreciate this one.

Check out the other bloggers participating in this blog tour. 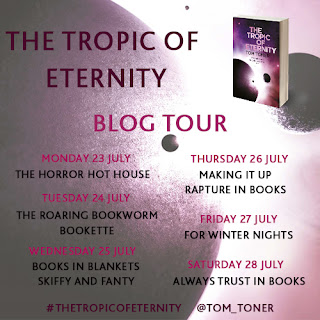