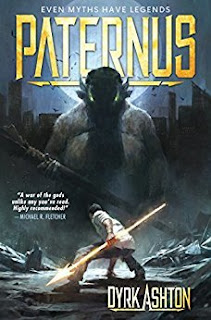 Plot: Even myths have legends. And not all legends are myth.
When a local hospital is attacked by strange and frightening men, Fiona Patterson and Zeke Prisco save a catatonic old man named Peter--and find themselves running for their lives with creatures beyond imagination hounding their every step.
With nowhere else to turn, they seek out Fi’s enigmatic Uncle Edgar. But the more their questions are answered, the more they discover that nothing is what it seems--not Peter, not Edgar, perhaps not even themselves.
The gods and monsters, heroes and villains of lore--they’re real. And now they’ve come out of hiding to hunt their own. In order to survive, Fi and Zeke must join up with powerful allies against an ancient evil that’s been known by many names and feared by all. The final battle of the world’s oldest war has begun.

Paternus is an exciting story, with a very fast-paced plot and accessible prose.

It just did not quite work for me. I'm interested in the sequel, and definitely will keep an eye on future releases of Dyrk Ashton, though.

Let's get the negative out of the way first. This reads a bit like it should actually be a movie. The narration hops from character to character, changing the point of view frequently, sometimes mid-paragraph. I found that a bit jarring. This is best enjoyed with popcorn, sitting in a cinema. As a book it just did not quite work. At least for me.

Others love this one, so if the premise sounds intriguing, give it a try.

Of course, what I described above, makes this novel unique. I highly enjoyed Ahston's fight scenes, and thought his narrative style was captivating.

Ashton's idea and world building are amazing. The visuals are captivating, and I think we can expect many great stories from Ashton's imaginative mind. The world building is intricate, filled with bits of world religions and various mythologies. I can't imagine the number of hours the author must have put into research.

When I say it's filled with world religions and myths, I mean, there's everything: from Chinese mythology to the Norse gods. There's Baphomet, and Ao Guant, there's Minotaur and Tengu. Just to name a few.

If mythology is at all what you're interested in, pick it up. Paternus is filled with it like no other book I've ever read.
By Olivia at August 23, 2018
Email ThisBlogThis!Share to TwitterShare to FacebookShare to Pinterest
Labels: dyrk ashton, fantasy