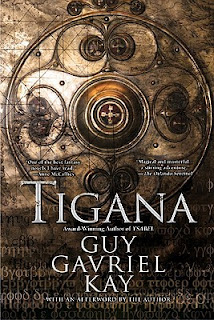 Plot: Tigana is the magical story of a beleaguered country struggling to be free. It is the tale of a people so cursed by the dark sorceries of the tyrant king Brandin that even the very name of their once beautiful home cannot be spoken or remembered. But years after their homeland’s devastation, a handful of men and women set in motion a dangerous crusade—to overthrow their conquerors and bring back to the world the lost brightness of an obliterated name: Tigana.
Against the magnificently realized background of a world both sensuous and brutal, this masterful epic of a passionate people pursuing their dream is breathtaking in its vision. A spellbinding novel in which myth comes alive and magic reaches out to touch you.

What did I think?
I'm torn somewhere between three and four stars.

I can hear a gasp among fantasy fans, since Tigana is more or less considered to be the best standalone novel by one of the best fantasy authors of all times.

Let me talk about the good first, and of course that means I start with the writing. Kay's prose is wonderful. It makes you feel like you're sitting around a fire listening to a bard. It's poetic, lyrical, magnificent. I love the way he weaves words into sentences, and the writing alone will make sure I'll always be open to picking up a new GGK book.

The setting is well researched, filled with vast imagination, and I could imagine myself living there. I loved discovering Kay's version of Renaissance Italy. The world building is fascinating and intricate.

The characters are well developed, both the men and the women. I enjoyed getting to know them, and read about their pasts, hopes and fates. Dianora's first chapter was a bit jarring, mostly because it's such a big shift from one part of the story to another, but once I found my bearings I fell in love with her. I am not a fan of her ending, and I'm not entirely sure I buy her motivation in her last scene, but she quickly turned into my favourite character along with Brandin.

What's wrong with this book then, you ask? Well...I'm afraid the next few words will result in eggs being thrown at my blog. I *whispers* felt bored every now and then.

It didn't grip me like Lions of Al-Rassan did. At times, I put the book down and didn't pick it up for weeks. I can't tell you why. I just didn't manage to emotionally connect with Tigana. No tears were shed. No sniffles accompanied the ending.

I closed the book, returned it to the library, and that was that for me and Tigana. I'm sorry.

Nonetheless, I highly recommend Tigana to every fantasy fan, no matter if they've read GGK before or not.
By Olivia at December 10, 2018
Email ThisBlogThis!Share to TwitterShare to FacebookShare to Pinterest
Labels: fantasy, guy gavriel kay