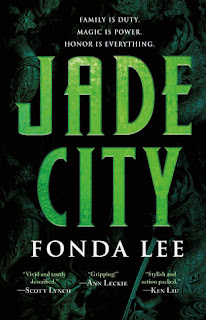 Plot: Magical jade—mined, traded, stolen, and killed for—is the lifeblood of the island of Kekon. For centuries, honorable Green Bone warriors like the Kaul family have used it to enhance their abilities and defend the island from foreign invasion.
Now the war is over and a new generation of Kauls vies for control of Kekon's bustling capital city. They care about nothing but protecting their own, cornering the jade market, and defending the districts under their protection. Ancient tradition has little place in this rapidly changing nation.
When a powerful new drug emerges that lets anyone—even foreigners—wield jade, the simmering tension between the Kauls and the rival Ayt family erupts into open violence. The outcome of this clan war will determine the fate of all Green Bones—from their grandest patriarch to the lowliest motorcycle runner on the streets—and of Kekon itself.
Jade City begins an epic tale of family, honor, and those who live and die by the ancient laws of jade and blood.

Jade City sounds great on paper, and the entire fantasy community seems to love it. I was very much looking forward to reading it, especially after seeing it got the World Fantasy Award.

Perhaps my expectations were too high. It's never fair to a book to go in with such high expectations.

And, unfortunately, I didn't quite connect with this book as much as I would have liked. Or as much as I...expected to.

Let's talk about the positive things first. Because at no point did I ever think it's a bad book. On the contrary. I think most fantasy fans will love it.

The setting is inspired by Asia, and it REALLY shines. In fact, this reads a bit like the Godfather with magic happening in the middle of Hong Kong. In this world Jade gives you power. Jade is what makes you strong. But not everyone can wear Jade.

Fonda Lee created a captivating setting for her novel. It takes place in an alternate world, but is similar to ours when it comes to technology, which gives this almost an Urban Fantasy feel.The world building is intricate, fascinating and a joy to discover.

The plot is very complex and based on various conflicts between dynastic families. At times it feels like watching a martial arts movie. It's quite gory, and there's a lot of violence, but at no point did it feel like too much.

The characters are varied, interesting and three dimensional.

Sounds fantastic, right? If you think so, please give this one a try. So many people loved it. Don't listen to me.

The main problem I had was getting into the story. It took me the entire first half of the book to get invested. I thought it would be a quick read that I wouldn't be able to put down, but I kept putting it down and not picking it back up.

The writing is very detailed and almost clinical at times. It felt like we were told too much about the characters instead of shown. Every time the author mentions something new the reader gets paragraphs of info about that something new, explaining in detail what it is, where it comes from and what everyone thinks of it.

Because of this, I never really emotionally connected with the characters or the book, and while I highly enjoyed the various twists and turns and the complex plot, I failed to really care.

Since I'm in the minority, I suggest anyone who likes Asian settings, the Godfather and martial art movies give this one a shot.
By Olivia at January 09, 2019
Email ThisBlogThis!Share to TwitterShare to FacebookShare to Pinterest
Labels: fantasy, fonda lee