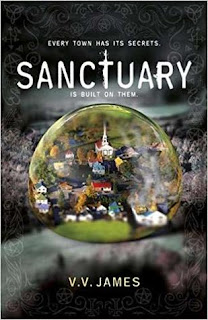 I've got myself a few new books on Netgalley, even though I'm also buried in requests from indie authors. My summer will be spent catching up. I'll probably not accept any new requests for a while.

This one, Sanctuary by V.V. James is the read I'm most looking forward to, but it'll have to wait for a few weeks because it won't be published until August, and I have to prioritise the books that come before.

But let's talk about James for a moment. She's this terrific author who also works for the BBC and has worked on documentaries about both Trump and Brexit. She knows her politics. She published the Dark Gifts trilogy under the name Vic James. Here's my review for the third book which contains no spoilers for the series. Her series offers a lot of politics, which I enjoyed. And she gives the other side some POVs, showing that at any moment your political opponent is human. Like you. Perhaps you think your opponent is wrong, and perhaps they are evil, but they're still human, they're still people, and that's what makes the Dark Gifts trilogy so fascinating. I can't wait to read Sanctuary, a novel about witches.


Goodreads summary of Sanctuary: The small Connecticut town of Sanctuary is rocked by the death of its star quarterback.
Daniel's death looked like an accident, but everyone knows his ex-girlfriend Harper is the daughter of a witch - and she was there when he died.
Then the rumours start. When Harper insists Dan was guilty of a terrible act, the town turns on her. So was his death an accident, revenge - or something even darker?
As accusations fly and secrets are revealed, paranoia grips the town, culminating in a trial that the whole world is watching... 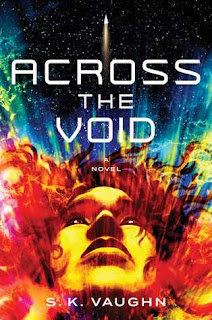 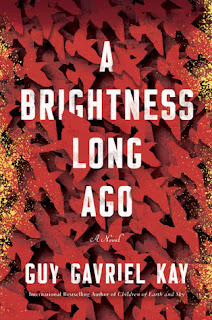 I don't know anything about Across the Void, but the premise intrigued me and I clicked "request" faster than my brain could yell: NO YOU'VE GOT NO TIME. And Guy Gavriel Kay is one of my favourite authors.

Goodreads summary for Across the Void: Across the Void follows the sole survivor of a catastrophic accident in space that leaves her drifting in the void with only the voice of her estranged husband, a NASA scientist, to guide her back to Earth.
Commander Maryam “May” Knox awakes from a medically induced coma alone, adrift in space on a rapidly failing ship, with little to no memory of who she is or why she’s there.
Slowly, she pieces together that she’s the captain of the ship, Hawking II; that she was bound for Europa—one of Jupiter’s moons—on a research mission; and that she’s the only survivor of either an accident—or worse, a deliberate massacre—that has decimated her entire crew. With resources running low, and her physical strength severely compromised, May must rely on someone back home to help her. The problem is: everyone thinks she’s dead.
Back on Earth, it’s been weeks since Hawking II has communicated with NASA, and Dr. Stephen Knox is on bereavement leave to deal with the apparent death of his estranged wife, whose decision to participate in the Europa mission strained their marriage past the point of no return. But when he gets word that NASA has received a transmission from May, Stephen comes rushing to her aid.
What he doesn’t know is that not everyone wants May to make it back alive. Even more terrifying: she might not be alone on that ship.

Goodreads summary for A Brightness Long Ago: A Brightness Long Ago is set in a world evoking early Renaissance Italy and offers an extraordinary cast of characters whose lives come together through destiny, love, and ambition.
In a chamber overlooking the nighttime waterways of a maritime city, a man looks back on his youth and the people who shaped his life. Danio Cerra's intelligence won him entry to a renowned school even though he was only the son of a tailor. He took service at the court of a ruling count, and soon learned why that man was known as the Beast.
Danio's fate changed the moment he saw and recognized Adria Ripoli as she entered the count's chambers one autumn night, intending to kill. Born to power, Adria had chosen, instead of a life of comfort, one of danger, and freedom. Which is how she encounters Danio in a perilous time and place.
Vivid figures share the unfolding story. Among them: a healer determined to defy her expected lot; a charming, frivolous son of immense wealth; a powerful religious leader more decadent than devout; and, affecting all these lives and many more, two larger-than-life mercenary commanders, lifelong adversaries, whose rivalry puts a world in the balance. 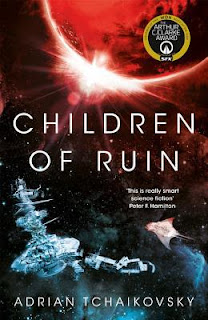 Anyone who follows me knows I love Adrian Tchaikovksy. And Children of Time was one of my favourite reads in 2016. Now, there's finally a sequel, and I simply can not wait. It's sci-fi, and it's sci-fi at its best.

Goodreads summary: Long ago, Earth's terraforming program sent ships out to build new homes for humanity among the stars and made an unexpected discovery: a planet with life. But the scientists were unaware that the alien ecosystem was more developed than the primitive life forms originally discovered.
Now, thousands of years later, the Portiids and their humans have sent an exploration vessel following fragmentary radio signals. They discover a system in crisis, warring factions trying to recover from an apocalyptic catastrophe arising from what the early terraformers awoke all those years before.

What's new with you? Any new books? Any new favourite reads? Anyone else buried under a pile of ARCs?
By Olivia at May 08, 2019
Email ThisBlogThis!Share to TwitterShare to FacebookShare to Pinterest
Labels: adrian tchaikovsky, guy gavriel kay, s.k. vaughn, tbr, vic james