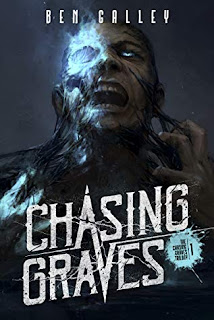 Plot Summary: Meet Caltro Basalt. He’s a master locksmith, a selfish bastard, and as of his first night in Araxes, stone cold dead.
They call it the City of Countless Souls, the colossal jewel of the Arctian Empire, and all it takes to be its ruler is to own more ghosts than any other. For in Araxes, the dead do not rest in peace in the afterlife, but live on as slaves for the rich.
While Caltro struggles to survive, those around him strive for the emperor’s throne in Araxes’ cutthroat game of power. The dead gods whisper from corpses, a soulstealer seeks to make a name for himself with the help of an ancient cult, a princess plots to purge the emperor from his armoured Sanctuary, and a murderer drags a body across the desert, intent on reaching Araxes no matter the cost.
Only one thing is certain in Araxes: death is just the beginning.

What did I think?
This is my first Ben Galley book, and two things struck me the most: pacing and world building.

Galley doesn't waste unnecessary words (or time) and the plot moves forward at a good speed. While I love long books, I highly appreciate shorter ones, since I'm - I almost don't dare and say it - I'm prone to skim descriptions. Still, Galley takes care to introduce his characters and they feel unique and three dimensional.

It is, however, the first book in a series and doesn't stand on its own. In fact, the ending is quite abrupt, with no real resolution, and there is quite a bit of set-up.

The world building is exquisite, refreshing, original and Galley dives straight into grimdark territory. It is obvious that the author spent a lot of time fleshing out his setting with striking detail, and I wouldn't mind reading more books set in this world.

Galley's writing is atmospheric. He paints a vivid picture, revealing a vast imagination. It's also dark, yet witty, and made me chuckle more than once. The prose is smooth, and I was pleasantly surprised by how descriptive it is, yet not a single word is unnecessary or wasted. That's skill.

How dark is Chasing Graves, you ask? I picture Araxes as some sort of Egyptian city. The dead rise and their souls get bound to coins, and then they're sold as slaves. Great concept, but pretty damn dark.

Caltro is definitely the one character that stood out to me the most, and mostly, I wanted to read about him. He's a master locksmith, and his arrival in Araxes ends in disaster. His great sense of humour is what made this book for me.

I had a ball reading Chasing Graves, and will definitely pick up the sequels. Recommended to all fans of grimdark fantasy. 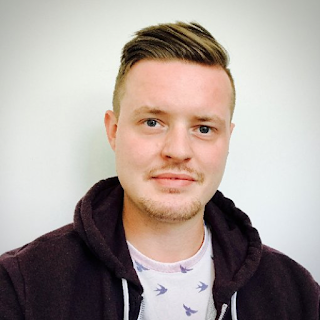 About the author: Ben Galley is an author of dark and epic fantasy books who currently hails from Victoria, Canada. Since publishing his debut The Written in 2010, Ben has released a range of award-winning fantasy novels, including the weird western Bloodrush and the epic standalone The Heart of Stone. He is also the author of the brand new Chasing Graves Trilogy.
By Olivia at June 27, 2019
Email ThisBlogThis!Share to TwitterShare to FacebookShare to Pinterest
Labels: ben galley, fantasy